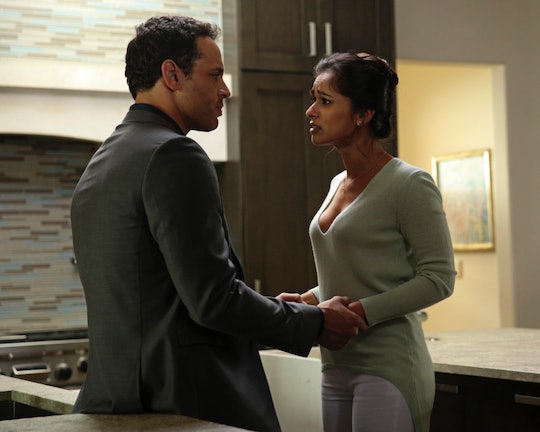 Who Killed Sarah Keaton On 'Notorious'? Her Husband Is The Most Likely Suspect

If were worried Notorious wouldn't be filled with the same level of crazy drama as the Shonda Rhimes' shows that come before and after it, there's nothing to fear. The series premiere kicked off with a bang that included everything from affairs, murder, and two potential political scandals. Although the premiere left us with a lot of questions, probably the most pressing one of the whole Notorious premiere is who killed Sarah Keaton?

The most obvious suspect is her husband, Oscar. It's clear their marriage was going through a rough patch and both Oscar and Sarah had some issues they were working through. Oscar's a recovering alcoholic and drug addict but he's been sober for the past five years, at least that's what he claims, but the cocaine in his car tells a different story. However, Oscar said the cocaine belonged to a friend so we'll take his word for it for now. Still, even if he was sober at the start of the episode he was definitely at a bar with a glass of what looked like borubon or some other alcoholic beverage the night before Sarah was found dead. Although he tried to call his lawyer, Jake, seemingly to get some help before he gave up his sobriety, Jake ignored the call because he was in bed with Oscar's wife. Yikes!

So it's very plausible that Oscar was drunk when he went home and possibly killed Sarah. It was Oscar that found Sarah after all. Plus, based on the pictures Julia received from an anonymous tipster, it seems Sarah wasn't the only one cheating in their marriage. It looks like Oscar was also having an affair and even worse it seems that he was abusive towards Sarah. That may explain why Sarah was getting a fake passport. Maybe she was running away from Oscar, Oscar somehow found out, and killed her.

Though this all seems very plausible this is only the first episode of Notorious and it's highly unlikely that the show would make Sarah's killer this obvious so early on. It's more likely there's something more to this story and it's much more complicated than it appears to be. We'll just have to stay tuned in to see what crazy revelation comes next.