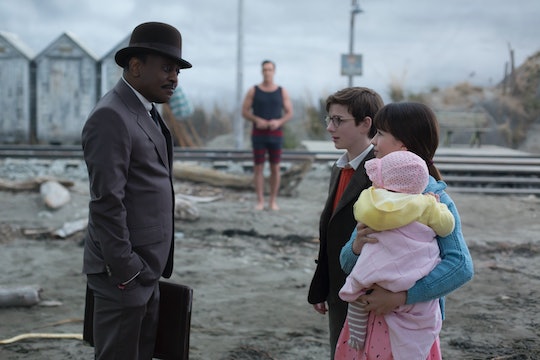 A Fire Starter Is Still On The Loose On 'ASOUE'

(Warning: this post contains unfortunate spoilers from Episode 8.) You should know that Netflix's new series is filled with a lot of unfortunate events. From the very beginning, the lives of Violet, Klaus, and Sunny Baudelaire is thrown off course when they're informed that their parents perished in a house fire. This is the catalyst for a seemingly endless array of unfortunate events, but one has to wonder what exactly caused the fire and if it was murder. And if the latter is true, then who killed the parents on A Series of Unfortunate Events?

While it would seem fair to assume the Baudelaire parents were murdered, there's one small detail that may indicate they either weren't murdered or at least knew their deaths were coming. Prior to the fire, the parents sent the children to the beach to play and Violet and Klaus even noted that it was strange their parents didn't come along with them like they usually did. Were the parents working on something for the secret society they're in that they didn't want their children to know about? Or did they know they were in danger and wanted to keep their children safe? Whatever the case may be, it appears as though the Baudelaire parents are truly dead and it seems pretty obvious who killed them.

Count Olaf went through extraordinary lengths to ensure he would become the legal guardian of the Baudelaire orphans and then tried to do everything in his power to steal their fortune. So it would make sense that he killed their parents, so he would have easier access to their money. But there is one serious flaw to this theory.

In the season finale, fans saw a mysterious figure outside of the Quagmire's home, wearing a hat with black and white feathers. Their face was hidden behind a newspaper, but they used some sort of laser device to light a photo on fire in the house, causing everything to quickly go up in flames. It seems fair to assume the person that set this fire is the same person that burned down the Baudelaire home as well. But at the time that this happened, Count Olaf was at the Lucky Smells Lumbermill messing with the Baudelaire children.

It's possible it was one of Count Olaf's henchmen that set the Quagmire house on fire, but their lack of intelligence in the show thus far makes it hard to believe they would be able to pull that off. Therefore the mystery of the fire starter remains unsolved. Hopefully, there will be more answers in the next season if the show gets picked up.