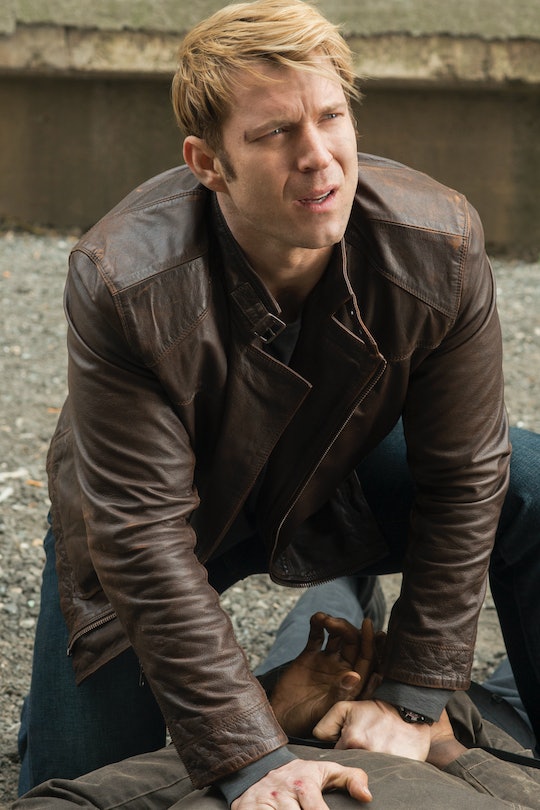 Warning: this post contains spoilers from Season 2 Episode 2. There's a murderer on the loose in New York City. In the first episode of Jessica Jones Season 2 a man who called himself the Whizzer was killed right in front of Jessica and then by the end of the second episode Trish's ex-boyfriend met a similar fate. So who killed Will Simpson on Jessica Jones? He came back only to leave us once again.

When Simpson returned on Jessica Jones most fans probably thought he was out for revenge. The last time Trish and Jessica saw him he'd been hopped up on the pills he'd gotten from Dr. Kozlov and IGH, the mysterious organization that is somehow connected to Jessica. Dr. Kozlov's men ended up taking him away and Jessica and Trish both assumed he was dead. However, as any good Marvel fan knows, it's best to assume no one's actually dead unless there's sufficient evidence.

Anyway, once Simpson popped back up, it made sense that Trish was kind of freaked out. She was so nervous, in fact, that she ended up shooting him in the knee and tying him up. However, when she and Jess started questioning him, it became clear that Simpson was actually on their side.

According to Simpson, he'd actually been trying to protect Trish from whatever thing killed Whizzer and also apparently killed Dr. Kozlov. Previously, Jessica was under the impression that Simpson was the one who killed Kozlov, but Simspon swore it wasn't him. He said that because Trish was digging to find out information about IGH someone — or something — was coming for her and he was just protecting her.

However, Simpson was still taking drugs — not the pills from before, but a sort of inhaler that still gave him strength — so it was a little hard for Trish and Jessica to trust him. Even so, in the end they did, especially when something showed up. They freed Simpson from his constraints so he could protect himself and then ran, leaving Simpson to face whatever it was that was coming for him in the dark. Unfortunately, he was unable to defend himself and when Trish and Jessica found him later, he was very dead. But what was it that killed Simpson?

The most likely suspect is whatever was created when both Jessica and the Whizzer got their powers. When Jessica went to the secret hospital or lab that was clearly part of IGH, she had flashbacks about what happened to her there. At the end of Season 1 it was revealed that IGH paid for Jessica's hospital bills after her family's car accident, which is what first led Trish and Jessica to question their involvement in Jessica's powers. Now with the flashbacks and the fact that Trish discovered there was time missing between Jessica's car accident and her time in the hospital, it's clear IGH definitely did something to our beloved vigilante. And they apparently created something else too.

During her flashbacks, Jessica remembered someone, or rather something, strangling her. It seems most likely that this is what took Simpson's life. After it killed Simpson, the thing was able to jump over Trish and Jessica and escape. Plus, what it did to Simpson wasn't something a normal human could do. Simpson neck was broken in a terrible angle, presumably by his killer's bare hands. And if this is the same person that killed Whizzer, that also proves they're incredibly strong, just like Jessica.

Simpson said it would take a monster to kill a monster, but as Jessica said, Simpson was the wrong monster. Maybe she's the right one. Hopefully, Jessica will be able to find this thing and kill it before it kills someone else.