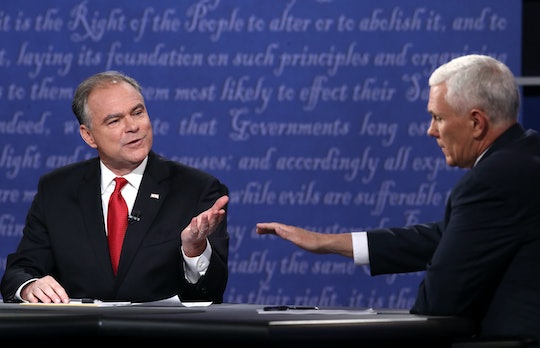 Who Lost The Vice Presidential Debate? There Wasn't An Obvious Loser

The first and only vice presidential debate is over, and of course there's one major question to be asked: who won, and who lost the vice presidential debate? The night, while not as boring as some people thought, wasn't the most exciting thing ever. This is evident since there wasn't a clear loser between Tim Kaine and Mike Pence. That's not to say the men didn't get people talking. But what people are talking about is a rather indecisive opinion on who walks away the victor.

More Like This
20 Candid Photos Of Queen Elizabeth With U.S. Presidents Over The Years
25 Great Sci-Fi Movies To Watch As A Family
25 Great Kids’ Shows To Stream On Paramount+
20 Great Movies About Fathers & Sons That Will Make You Laugh & Cry

Immediately after the debate ended, Mike Pence seemed to be the general winner on CNN. But, interestingly enough, CNN asked a focus group of undecided voters who they believed won the debate and the majority of them chose Tim Kaine. So, clearly there's a wide span of opinions coming in directly after the debate. The wide range might be partially due to the fact that Pence did something that he really needed to do for Donald Trump's campaign — go after Hillary Clinton while remaining level-headed and keeping an even — wait for it — temperament. While that isn't a necessary "win", it does help his side of the campaign immensely.

As CNN's commentators said following the debate, Pence was "conversational", he was "reformed", and instead of trying to defend Trump — something Kaine poked at heavily — Pence went after Clinton. The CNN/ORC poll closed the night with numbers leaning toward Pence, but it was an incredibly close call.

With that said, The Wall Street Journal notes that Hillary Clinton's camp is probably very happy with Kaine's performance at the debate. Peter Nicholas notes in WSJ's live update throughout the night, "Mr. Kaine carried out a basic obligation of vice presidential nominees: Skewer the opposing ticket early and often."

Presidential candidate Donald Trump tweeted his opinion on who won the night. Of course, it leaned exactly the way one would expect. In his eyes, there was no competition.

The Twittersphere itself seems overwhelmed with the debate. Who won? Who lost? What just went down?

So, what happens now that there seems to be a bit of a draw on who lost the debate? The days following the debate are truly the most important. Because the vice presidential candidates only get one debate this time around, they won't get a redo. So, what they said here is going to be scrutinized, fact-checked (which is already happening), and used throughout the remainder of the campaign. For instance, NPR live fact-checked the debate and found that Gov. Pence's comments were less truthful than Sen. Kaine, specifically in regards to the insult-driven campaign Pence declared Clinton and Kaine were running, without taking ownership of his own side's campaign.

The days following will be important. The receipts will come out, the facts will be lined up, and hopefully the winner and loser will be officially named.