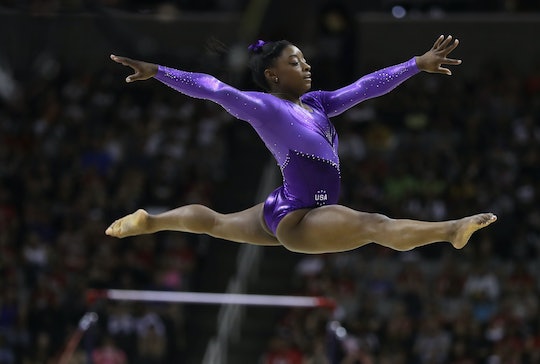 Who Made The 2016 U.S. Women's Olympic Gymnastics Team? Meet The 5 Females Heading To Rio

It could not have been easy to Márta Károlyi, the national team coordinator for USA Gymnastics, to create this year's dream team. Though she had a large field of talent to chose from, Károlyi has the added pressure to produce the next Fierce Five or Magnificent Seven. But her choices for the 2016 U.S. women's Olympics gymnastics team — Simone Biles, Laurie Hernandez, Aly Raisman, Gabby Douglas, and Madison Kocian— could live up to those expectations in Rio.

The first gymnasts named to the 2016 U.S. women's Olympics gymnastics team was the heavy favorite, Simone Biles. Based on the official USA Gymnastics’ rules, the first-ranked gymnast automatically earns a spot on the Olympic team. In this case, that was Biles. The 19-year-old Texas gymnast went into Sunday night at the top of the score board. More specifically, Biles finished on Friday with a score of 61.85 — a whole point ahead of second-place finisher, Laurie Hernandez. She finished the competition Sunday evening with an impressive combined score of 123.25, despite a fall off the balance beam during her last rotation.

Laurie Hernandez secured herself a spot on the team after two nights of stellar performances. The 16-year-old New Jersey native's place on the team shouldn't come as a shock, as she wowed judges and fans alike with her flawless routines and vivacious personality. Her consistency helped her maintain a second-place finish both nights, only falling 2.1 points behind Biles.

2012 Olympic veteran Aly Raisman, who finished their in the competition, was the third member announced to the team. Making the 2016 team has been a mission of the 22-year-old for quite some time, especially after Raisman failed to medal in the 2012 all-around competition. Though it’s challenging to not only come back to the sport, but secure a spot on the team, Riasman told The Washington Post that it was something she had to do. “I didn’t want to be sitting on the couch watching the Olympics and thinking, ‘What if,’” she told the publication.

Raisman, however, won't be the only Olympic veteran on the team. 2012 Olympic all-around gold medalist Gabby Douglas will be pursuing her road to Rio, though it hasn't been an easy one. In the first night of the trials, Douglas during her beam routine while executing a necessary turn. This error put Douglas in seventh place at the end of Friday night's competition. Though she seems to go into Sunday night's event with a clearer head — completing a nearly flawless vault and bar routine, Douglas once again faltered on her beam routine and wound up in seventh place again.

Many believed that this poor finish would prevent Douglas from moving onto the Olympics. However, as Tim Dagget and Nastia Liukin pointed out during their live commentary, the team needs help on the vault and uneven bars — two areas where Douglas seems to shine.

Rounding out the 2016 U.S. women's Olympic gymnastics team is Madison Kocian, who was a bit of a wild card going into the deliberation. The 19-year-old Texan finished Sunday night's competition in eight place — a location that doesn't scream Olympic guarantee. But, much like Douglas, Kocian shines on an apparatus where others are weaker — the uneven bars. According to ESPN, the fifth spot was between Kocian and Ashton Locklear, another uneven bars star. Though both women earned the same score on the apparatus Friday night, Kocian told the publication that her fate would be decided by more than a number.

"The scores don't really matter to the selection committee right now," Kocian told ESPN. "It's what you have been doing in practice throughout the week and your consistency." And, for Kocian, it seems the consistency paid off.

MyKayla Skinner, Ragan Smith, and Locklear will serve as alternates to the team and accompany the five women to the infamous Károlyi Ranch. There, work day and night to flush out their routines and fix any flaws, in hopes of delivering erfect performances in Rio on Aug. 9. And, like most of America, I can't wait to see what they bring to the floor (and beam, and bars, and vault.)