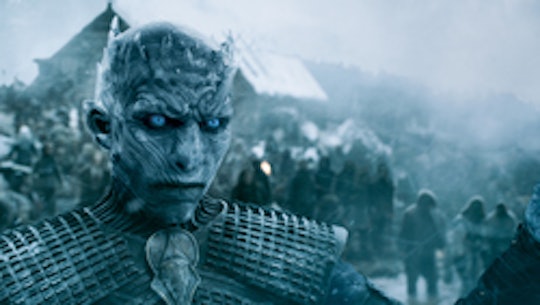 Who Made The Night’s King On ‘Game Of Thrones’? Bran's Vision Says It's Not Who You Expect

On Sunday night's episode of Game of Thrones, Bran had another vision. The episode description said, "Bran learns a great deal," and most of the internet's prolific commentariat suspected that this meant that Bran would learn more of what happened at the Tower of Joy, where believers in the R + L = J theory believe Lyanna Stark was in the midst of giving birth to Jon Snow. However, it looks like Bran actually learned some answers to a different Game of Thrones mystery, the origin of the Night's King. In his vision, Bran watched members of the Children of the Forest plunge a terrible black dagger into the heart of a man tied to a tree as his eyes turned a familiarly sinister shade of icy blue. It looks like this is the Night's King, the first of the White Walkers, and the leader of the undead army that threatens all of Westeros. Oh, man.

Upon coming out of his trance, Bran looked to the Child of the Forest who's been hanging around, the same person he saw put the dagger into the newborn Night's King with the same shock the rest of us are currently feeling. "You did it!" he said, outraged. The Child argued that she was just trying to protect the Children and the trees, etc., but you know what they say about the road to hell...

The Night's King has been teased in many of the promos for Season 6 of Game of Thrones, so eager viewers were expecting to learn more about his origin story. But this revelation only leads to more questions. Was this just a random guy, or was there a reason the Children of the Forest chose him? What's his agenda? The Child said she was trying to protect the Forest, but how does this accomplish that goal?

Of all the mysterious figures on Game of Thrones, The Night's King may be a figure we know the least about. Not even the books give us any major clues as to who he is or what his end-game is. (On this show, everybody has an end game). According to the books, legend has it that the Night's King was a commander of the Night's Watch who fell in love with one of the Others, and declared himself "Night's King." But based on Bran's vision, this isn't exactly what happened.

So what's the truth? We'll have to wait and find out.