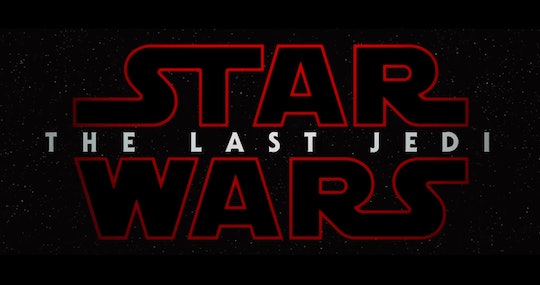 Who Narrates 'The Last Jedi'?

The trailer for the latest installment of the Star Wars franchise is finally here. If you've seen the teaser, you may be wondering who narrates The Last Jedi? Well, the evidence points to it being Luke Skywalker.

Let's think back to where the series left off at the end of Stars Wars: The Force Awakens (warning: spoilers ahead). The resistance has been searching for the last Jedi, and they finally piece together the map that will lead them to him according to Cinema Blend. Rey sets off on a journey and arrives on a mysterious planet, where she sees a lone hooded figure. He slowly turns around, and fans see it's Luke Skywalker. The credits roll without him saying a word, so you're left to guess what happens next.

Luckily, there's plenty of speculation about what Rey and Luke will be up to in the new movie. As a Jedi, Luke has been trained in the ways of the Force (by none other than Yoda himself). Rey, however, has never been trained, but according to Entertainment Weekly, she's already displayed some amazing powers. She's used her powers to exert mind control, she's summoned things by telekinesis, and she's survived a fight with Kylo Ren, the villain hoping to follow in the footsteps of his bad-guy grandfather Darth Vader. If that's what she can do with no training in the ways of the Force, imagine what some tutoring from a Jedi will do for her skill set.

But will Luke be interested in training another Jedi? We can't assume he will be, given his past experiences. Screen Rant noted that Skywalker did spend some time training new Jedi— one of his pupils was the aforementioned Kylo Ren, and clearly that didn't work out so well. After seeing his own nephew (Kylo is the son of Leia and Han Solo) go over to the dark side, Luke may not be so eager to take on another student. His pain and guilt have forced him into seclusion, and Rey may not be able to lure him out of it — especially if Luke finds out that his friend and brother-in-law Han has been killed by Kylo.

Sadly, we'll have to wait quite a few more months to find out for sure what goes down in the next film. Star Wars: The Last Jedi isn't due in theaters until Dec. 15. On the bright side, at least it gives fans more than enough time to re-watch the first seven episodes.