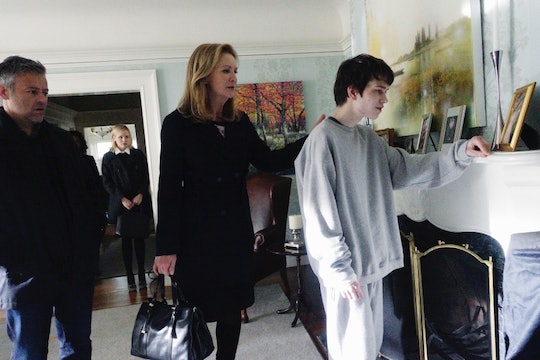 Who Planted the Ship on 'The Family'? This One Clue Could Reveal A Huge Secret

Well, ABC has done it again with the gripping new drama The Family. The new series — created by Scandal writer Janna Bans — is about a boy named Adam, who reappeared in his hometown after being presumed dead for a decade. At this point, the mystery begins as viewers try to figure out if Adam is really Adam. While DNA confirms his identity, the planted ship in The Family pilot causes reason to be suspicious.

Usually, one would trust the results of a DNA test that confirms the identity of a previously missing boy. But, there are clues dropped throughout the pilot that tell us we shouldn't trust the test. For example, eight-year-old Adam was preoccupied with his ship in the bottle. Now, 18-year-old Adam is confused by it. In one scene, Adam asks his brother Danny how the ship got inside the bottle. Although it's a bit of a stretch this early on, this may be a hint that Adam could possibly be an imposter. When Danny confronts his family with the possibility, however, they shut the idea down.

The ship in the bottle comes up again later in the episode once it is entered into evidence. In a flashback, we see Hank — who had originally confessed to Adam's murder and was imprisoned for it — asked about the ship in his interrogation by police officer Nina Meyer. At present time, the now Sergeant Meyer examines the ship, pointing out that it was void of fingerprints and was cleaned from the inside out. Pretty specific, right? Did Adam — the real Adam — do this, or did his capturer? Or did someone else?

Perhaps Adam's sister, Willa, has something to do with the conspiracy. While other members of the family are questioning his identity, Willa appears to be certain that Adam is who he says he is. She has DNA evidence on her side, but she also could be hiding something — which is apparent from her scene in the church. Willa is seen giving a confession for the first time in six days, and previously to that, a decade — coincidentally when Adam disappeared. Did Willa have something to do with the ship being planted? She seems too settled on the mysterious return of her brother to not have some involvement.

And then there's Claire, Adam's politically-savvy mother. At the time of Adam's disappearance, Claire was running for city council. In the present, she is the Mayor of Red Pines and has her sights on becoming Governor of Maine. She says she wants to protect American families from enduring what her and her family endured when Adam disappeared. As noble as that is, it makes you wonder if Claire could also have something to do with her son's disappearance in order to advance her political career. Like Willa, she was adamant that Adam was who he said he was, with no objection. It would be a big stunt to pull, but crazier things have happened.