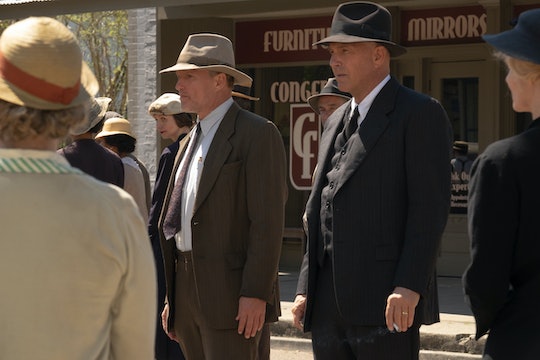 These 'The Highwaymen' Actors Are Actually Stunt Doubles

The latest crime drama from Netflix, The Highwaymen, is now available to stream and you’re probably not ready for it. The film is based on the true story that unfolded around a pair of notorious criminals from the '30s Depression-era, Bonnie Parker and Clyde Barrow. You know, the Bonnie and Clyde. With a stellar cast that includes Kevin Costner and Woody Harrelson leading the law enforcement charge, who play Bonnie and Clyde In The Highwaymen? These are two actors/stunt performers you need to have on your radar.

Chances are you're not be familiar with the actors' names — Emily Brobst as Bonnie, and Edward Bossart as Clyde — but you've probably seen them each kicking major a** in their typical roles as stunt doubles for other actors. Together, their work has appeared in numerous places and once you see them in action, you’ll understand why. Bossart has starred in shows like Criminal Minds, The Mick, and Shameless — mostly showing off his stunt work skills. His role as Clyde in The Highwaymen looks to be one of only three acting credits, so this is huge. It doesn’t matter how the story ends; it’s what he does with his time on screen that’ll keep you captivated.

While Brobst, a Wisconsin native, has had roles in the 5th Wave, Godzilla, and Looper (to name a few), she has a Twitter account that hasn't been active since 2016, and Instagram page, but it's private. If you're aWalking Dead fan she's been the stunt double for a few of the actors, as well as dozens of other projects. She even did stunts on Nickelodeon's Big Time Rush for Ciera Bravo back in 2010 which means she's the Queen stunt woman, IMHO. Playing Bonnie in The Highwaymen is just one of seven acting credits on her resume, but expect to see her in the upcoming horror flick, Annabelle Comes Home as Rory (which is in post-production).

Everyone knows about Bonnie and Clyde's criminal history, but The Highwaymen aims to tell the stories of those affected by their acts before they were shot to death by Texas and Louisiana state police while driving a stolen car near Sailes, Louisiana. Bonnie and Clyde had been on the run for two years, acquiring a slew of accomplices along the way — eventually named the Barrow Gang — that would terrorize banks and stores across the country, killing anyone who stood in their way. Their spree traversed five states before they were ambushed and killed: Texas, Oklahoma, Missouri, New Mexico and Louisiana.

Kevin Costner plays former Texas Ranger Frank Hamer, while Woody Harrelson plays Maney Gault. There was a famous Bonnie & Clyde movie made in the '60s but this version has been in the making for over 10 years. According to Vanity Fair, The Highwaymen is focused on"two aged former Texas Rangers, charged with taking down Bonnie Parker and Clyde Barrow when the F.B.I. couldn’t." Basically, it's less about Bonnie and Clyde, and more about the law enforcement, the people they hurt, and those who loved them.

Whether you knew of Bossert and Brobst before, or this is your first time hearing their names, their roles in The Highwaymen will, no doubt, be important ones. I admit, it's refreshing to see a new take on the historical events with less focus on the supposed anti-heroes, and more spotlight on those who made sure justice prevailed. Sorry, Bossert and Brobst, but I'm all Costner and Harrelson for this one.