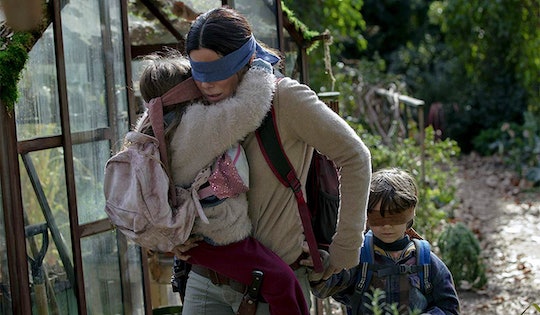 The holidays are the best time for highly anticipated movie releases. If the typical rom-com isn't your bag, post-apocalyptic thriller might give you the warm and fuzzy feelings. Such is the case with the new Netflix film, Bird Box. Adapted from the 2014 novel by Josh Malerman, Bird Box has an all-star cast from Sandra Bullock to the two breakout child actors who play Bullock's kids in the terrifying movie. So who play the kids in Bird Box?

The tiny tots who hold their own alongside Bullock (and other mega stars like Sarah Paulson and John Malkovich) in Bird Box are named Julian Edwards and Vivien Lyra Blair. Julian is the little brother of actress Stella Edwards (she plays Lois on Nobodies, among other things). His acting resume has a lot of good stuff on it for being so young. This kid has already appeared on Star vs. The Forces of Evil, Ready Player One, Runaways, and more. His Instagram — run by his parents — is chock full of adorable snapshots of Edwards rocking the runway, hanging with his celeb friends, and singing the Barney theme sing with his big "sissy" as she plays the guitar. My heart's not melting — your heart is melting.

As for Blair, she played Serenity of the 2018 mini-series, Waco, had a minor role for Band-Aid, and it looks like Bird Box is her first "big" project. I have no doubt that all the Hollywood execs will be knocking down her door after watching her in Bird Box.

The movie itself — ready to stream on Netflix Dec. 21 — follows a mother of two (Bullock) in a post-apocalyptic world. Her goal is to find somewhere safe after an evil force lurks. The only hitch? They have to remain blindfolded because one look at this creature and they'll turn into dangerous, suicidal killers. “If you look, you will die,” Malorie says in the Bird Box trailer. Apparently, this thing takes the form of your worst fear so if you can't see, you can't become the next victim. There are other survivors, though not many, and they have to find a way to escape the creature's powers and survive.

Bullock previously said at a Netflix Film panel that the initial script for Bird Box didn't quite click with her. As the mother of a 6 and 8-year-old, she couldn't relate to the character's dismissiveness (and sometimes yelling) at the children saying, "I don’t relate to someone who doesn’t want to be a mother; I don’t relate to someone who isn’t warm and can’t love freely. Then I read it a few years ago and it hit me in a way that I can’t explain." She elaborated during her appearance on Ellen recently where she spoke of how she was able to get to the place of treating the young Bird Box actors in such a manner. "You never let yourself get to that place unless you’re really scared," she said. "If your child runs out into the street, you don’t go, ‘Get back here.’ You go, ‘What the f— are you doing? Get over here!'" I don't know about you, but as a mom of two, this is super relatable.

Whether you're into horror-thriller movies, Bird Box is the type of Netflix and chill situation best experienced with the lights on. If you get too scared, remind yourself Edwards and Blair got through it, and so can you.