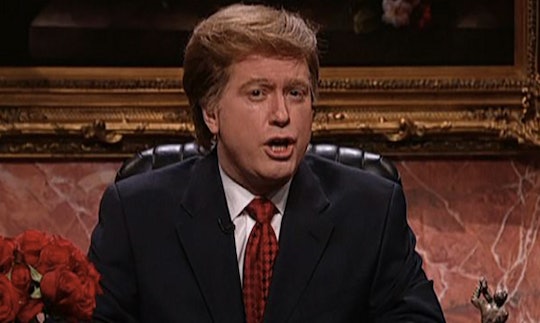 Who Played Donald Trump Best On 'SNL'? It's A Tough Call...

Let me start by saying that deciding who played Donald Trump best on SNL is the assignment I was born for. If you're a longtime SNL fan, you're familiar with the characters who've reappeared in the show's sketches over the years and the comedians who nailed them. Politicians are particular favorites, from Tina Fey's Sarah Palin to Will Ferrell's George W, and anyone who won't go a week without hearing, "Live from New York..." can call the best of those skits  to mind at any moment. Sometimes all of the impressions of a given personality are so good that it's hard to say which comedian captured his or her subject best — are you camp Amy Poehler or Kate McKinnon when it comes to Hillary impressions? Do you have to choose? That decision is especially challenging when the subject is Donald Trump, who SNL has actively lampooned since 1988, and all of the impressions are so, so good. How can you say which Trump trumped the rest?

First, let's review the contenders, shall we? In one corner of this strange triangle we have the late Phil Hartman, the first — and forever classic — Donald Trump impersonator. In the second corner we have long-time favorite Darrell Hammond, and in the final corner is newbie Taran Killiam. So kick back, relax, and loosen your silk tie and watch as we pit these performers in a head-to-head battle to the death. (OK, I'm exaggerating. This isn't The Hunger Games, but you should make sure a can of hairspray ready because this is sure to be one heated contest — which can prove dangerous for "the poof.")

Hartman played Trump on SNL in 1988 and in 1990, during his infamous scandal with Marla Maples and, again, during his divorce from Ivana. In each sketch, his eyebrows were unruly, his suit was neatly pressed, and he donned that signature coif we have all come to know — and hate — but what struck me most was his voice. Of the three comedians I reviewed, his voice was the one that immediately resonated. It was the one that struck me as the "most authentic." (And this is coming from me, a huge Darrell Hammond/Trump fan!)

Let me start this section by saying this: I am biased. Darrell Hammond is the Trump of my generation. He was part of the SNL cast during my college party days. He was a part of what I revere as the great SNL resurgence, starring alongside the likes of Will Ferrell, Tracy Morgan, Tina Fey, Jimmy Fallon, Amy Poehler, and Maya Rudolph — to name a few. And he got to play Trump during a fun time: i.e. he got to mock "The Donald" during his ridiculously self-indulgent Apprentice and Celebrity Apprentice days. So how did he do?

Taran Killam: Played "The Donald" from October 2015 to present

Killam, while not new to the SNL cast, is new to this role. In fact, Killam has only appeared as Trump one time thus far, but don't let that fool you: this kiddo is a fierce contender. From the creepy, political grin he flashes to the gruffness in his voice and the way he lets his mouth hang open after ending a sentence, this character is bound to get better and better in the coming months. (You hear that Trump; I want you to stay in this race as long as possible just so Killam can continue impersonating you.)

So what is more important: tone or mannerisms? One performance, four performances, or nearly a dozen? Whelp, it wasn't easy but after spending a few hours watching countless clips from these three amazing comedians I think I have a winner.

And the winner is...

This was a tough decision, but when you compare Killam's first Trump performance to Hartman's or Hammond's, his really does stand-out. Of course, these days, Trump really is giving us a lot more material to work with.

Kudos, Killam. This is gonna be some election year — can't wait to see what else you do with The Donald's crazy antics.