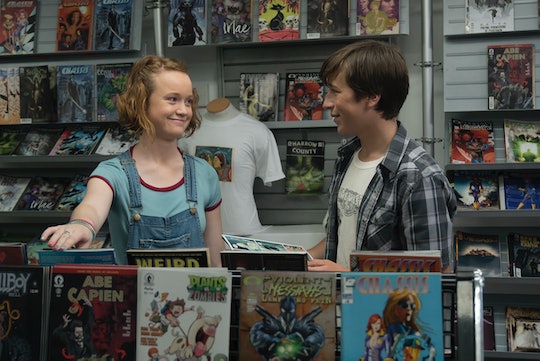 It seems almost every week Netflix is releasing a new original series and this week it's Santa Clarita Diet. Starring and produced by Drew Barrymore, the show follows the Hammond family who live in Santa Clarita, California and are pretty normal, except for the fact that the mom, Sheila (played by Barrymore), is undead. While Sheila comes to terms with her new way of life, her husband Joel and daughter Abby also have to learn how to adjust. While Joel, who's played by Timothy Olyphant, may look familiar to viewers, others may not recognize Abby. So who plays Abby on Santa Clarita Diet? Australian actress and playwright Liv Hewson plays Barrymore's on-screen daughter.

Though the 21-year-old may not be well-known in the United States (yet), she's done well for herself so far. She's written her own play, Bonas Mors, and starred in the popular TV short series Dramaworld, where she played protagonist Claire Duncan who gets sucked into her favorite K-drama. She's also made an appearance on the Australian drama The Code. Besides appearing in Santa Clarita Diet, Hewson is also appearing in the film adaptation of Lauren Oliver's bestselling novel Before I Fall, alongside Zoey Deutch, which premiered at Sundance this year.

Hewson is also starring in the short film Let's See How Fast This Baby Will Go, though it's unclear when the film will be released. Besides this, Hewson's future is wide open. Hopefully Santa Clarita Diet is as successful as it appears it will be and the show will be renewed for another season. The show, along with Before I Fall, are both great first steps for Hewson in Hollywood and it's likely she'll be popping up more and more in American film and television. For now, I'm excited to see her in both Santa Clarita Diet and Before I Fall, both of which have received pretty good reviews.

Based on the trailer for the show, it looks like Abby may be the smartest person in her family. It seems she's the one, with the help of her friend (possibly boyfriend), that figures out her mother is undead. She also eventually helps her parents kill people so Sheila will have something to eat.

Obviously the Hammonds aren't your typical family but if anyone can pull it off, this team of Barrymore, Olyphant, and Hewson surely can. You can see the Hammonds beginning on Feb. 3 when Santa Clarita Diet begins streaming on Netflix.