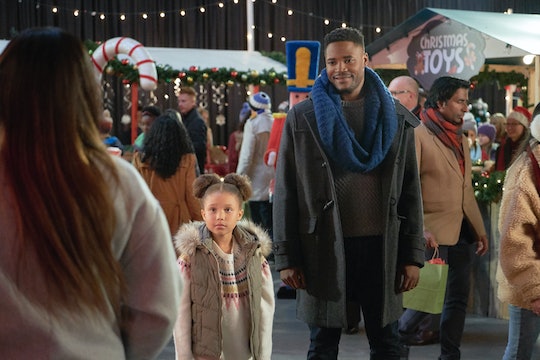 In the Hallmark Christmas movie A Gingerbread Romance, Adam is a lot like most rom-com TV love interests. That is to say — he’s really just there to be the love interest. One thing I’ll say for these TV movies is that they tend to center on a career-driven female character who unexpectedly meets the love of her life (at Christmastime, of course) and has to make an important decision. For Duane Henry, who plays Adam on A Gingerbread Romance, this isn’t exactly on par with most of his acting experience.

To explain the plot further: Girl (Taylor, played by Tia Mowry-Hardict) wants a promotion. Girl is entered into a competition adjacent to her occupation (she’s an architect tasked with building a life-size gingerbread house). Girl meets guy (Henry’s Adam) and they spend time together for (cough) strictly professional reasons (cough). But we all know how that ends — they fall in love.

Adam is a widowed baker with an adorable young daughter in that perfect age range where she and the main character can have real, meaningful interactions, but not too old that she’s entering the teenage years where a mother figure would face an uphill battle to win her approval. So he’s basically the perfect man.

Though the film takes place in the character Adam’s hometown of Philadelphia, Duane Henry is from across the pond — England, to be exact. He started off his acting career in London, appearing on popular TV series such as Blue Murder and Doctor Who. He has also appeared on the British soap opera Doctors numerous times. As for the big screen, Henry had small roles in films like the Madonna-helmed drama W.E. and the blockbuster sequel The Dark Knight Rises in 2012.

But Henry is probably best known for starring as Clayton Reeves on NCIS for two seasons. His character on the show is British like he is, and a real James Bond — no seriously, he’s an MI6 Intelligence Officer, just like 007 himself. Though Henry isn’t in law enforcement, he does have more in common with Clayton that just their country of origin. In a screenshot of an Instagram caption that he then shared on Twitter, the actor talked about how difficult it was after Reeves was killed off to say goodbye to a character who went through many of the same hardships he did, such as being homeless and not having his parents around for much of his life.

Family death is apparently a common theme in for characters Henry plays. In A Gingerbread Romance, he is his daughter’s only parent following the death of his wife. But that’s definitely not the focus of the movie. The budding romance between Taylor and Adam, which begins as a business relationship, is the foundation, and the theme of what makes a family and a home, especially at during the holiday season. And if things go the way they usually do in these kinds of movies, it’s pretty much a guarantee that for once, Reeve’s character is in for a happy ending.