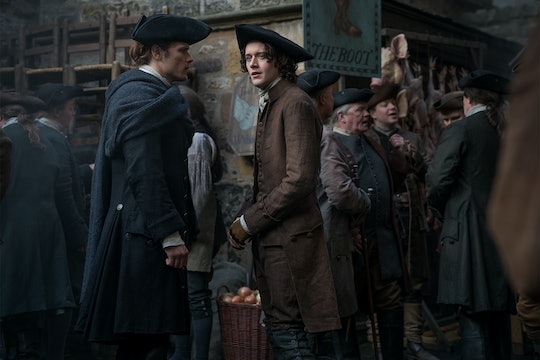 Get Ready To See Fergus All Grown Up On 'Outlander'

With a face as adorable as that, it was pretty clear that Fergus on Outlander was going to grow up to be a charmer. So now that the action on the show is ramping up 20 years after Claire left the 18th century through the stones, fans of the show are wondering if Fergus all grown up is as lovable as Baby Fergus. So who plays Adult Fergus on Outlander? César Domboy will play the adorable Frenchman, who has grown into a devilishly handsome young man.

In the books, Claire travels back to Scotland and reunites not just with Jamie (swoon), but also with Jamie's entire family who welcomed her into their lives, and with Fergus whom she and Jamie took under their wing when they lived in Paris. Jamie originally found Fergus in a brothel, where he drew his attention by swiping valuables from the establishment's patrons. Jamie first hired him just to steal some correspondence, but eventually he and Claire grew to love the little thief. They eventually adopted him as their own, and Fergus was raised for the rest of his life in Scotland at Lallybroch, even taking the last name Fraser as Jamie's foster son. When Claire finds her way back to them, Fergus is supposed to be around 35 years old.

Child Fergus was played to absolute perfection by Romann Berrux. The young actor's delightful portrayal quickly made the character a fan favorite. But a man in his 30s couldn't exactly be portrayed by a 16-year-old. So he was replaced by French actor César Domboy, who, don't worry, is every bit as charming and lovable as you need him to be. Though known to audiences in France, Americans may be less familiar with the French heartthrob's work. His most famous role in the United States was for the 2015 film The Walk, which starred Joseph Gordon Levitt as the Frenchman who decided it was a good idea to walk a tightrope between the two towers of the World Trade Center.

According to IMDB, this was not Domboy's first English language part. Before that he worked on the TV series Borgia (not be confused with The Borgias) as Guy de Leval. While his role was not a huge part in the show, he definitely cut his teeth on some big-name shows, and learned how to make an elaborate period costume look good. Although considering how adorable he is in all of his French awkwardness, he could probably make any costume look good.

In interviews, Domboy is becomingly self-effacing and clearly enthusiastic about making his mark on the show. When asked about taking over for the part of Fergus during an interview with Entertainment Tonight, Domboy said, "Young Fergus was so good that I'm really happy that I have to be as good as he was." He appears even to speak with the same French accent that Berrux did, which clearly just makes him even more perfect for the role. In the same interview, Domboy also talked about keeping Young Fergus in mind, while also bringing a more adult sensibility to the character. After all, it has been 15 years since we last saw Fergus when he lost his hand at Lallybroch. "We can imagine a lot has happened in those 15 years," the actor explained.

As a card-carrying Outlander super-fan, I very intrigued to see what Adult Fergus has to offer the show and witness what Domboy brings to the table. Fergus's character will go through a lot in the second half of the season, including his own star-crossed love affair and helping Jamie get out of his latest scrape. I'm obviously most excited to see Claire and Jamie finally get together, but seeing grown up Fergus is a close second.