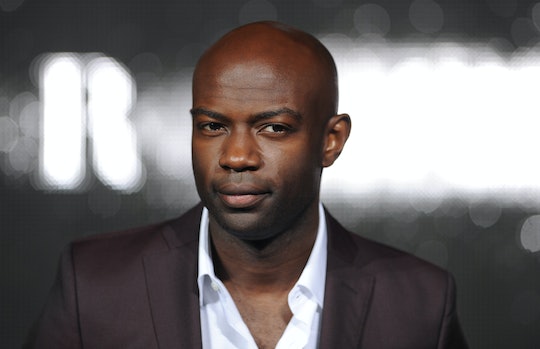 David Gyasi Steps Into The Magical World Of 'Carnival Row'

When Carnival Row premieres on Amazon Prime on Aug. 30, it will introduce audiences to a world filled with magical beings struggling to survive. Faeries and fauns exist alongside humans, though they face persecution every single day. A faun named Agreus Astrayon manages to make a fortune, but still struggles for acceptance. It sounds like a complicated role, but it shouldn't be any trouble for David Gyasi, the actor who plays Agreus on Carnival Row.

Gyasi is a British actor with quite an impressive list of credits on his resumé. You might have spotted him in the background of What a Girl Wants many years ago, where he landed his first role as one of Ian's bandmates. But he soon transitioned into more substantive parts. He appeared in a few episodes of Casualty, as well as several other shows, before snagging a recurring role on Mike Bassett: Manager. He continued to work in television, taking part in Dream Team, Waking the Dead, and White Heat. He was part of the regular cast of Chuggington and Containment, as well as Troy: Fall of a City. But TV wasn't his only medium. Gyasi was in quite a few movies too, recently appearing in Interstellar, Annihilation, and the upcoming Maleficent: Mistress of Evil.

Gyasi was interested in Agreus when he first read the script for Carnival Row. Though Agreus, referred to in-universe as a "puck," is supposed to be on the lowest rung of the social ladder, he owns the most impressive home in town. He has money to spare. "Agreus was phenomenally intriguing to me," Gyasi said while speaking to the Evening Standard. "What does it take to leapfrog so many social levels, and then what does it take to stay there?"

When he's not stepping onto screens big and small, Gyasi lives in England with his family: his wife Emma, a dance teacher, and their two kids. The Gyasi crew make regular appearances on his Instagram account, whether his wife is accompanying him on the red carpet or the whole family is heading abroad for a vacation.

Gyasi has had a lot of success as an actor, but his career might have gone very differently. While talking to Collider, he revealed that there was a period of time where he considered giving up. He had gone out to Los Angeles to see if he could make a go of it there. All went well initially and he earned an audition for The Dark Knight Rises. However, he had to wait for three months to find out if he'd gotten the part. In that time, he seriously considered abandoning acting (at least in L.A.), but just an hour after he'd resolved to keep going, he got the call that he was in the movie. Though much of his scene ended up on the cutting room floor, it still felt like a sign to him that he could genuinely thrive in Hollywood.

Gyasi has only continued to flourish since then, so he clearly made the right choice.