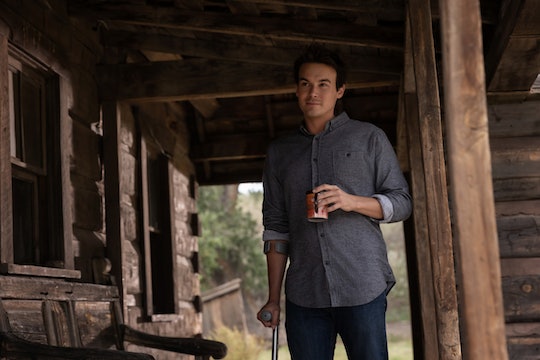 In Episode 6 of Roswell, New Mexico, fans got to see how Alex and Michael’s relationship began. Through a series of flashbacks, you see the struggles Alex faced growing up with his father, Master Sergeant Manes, and how he initially found a connection with Michael. The actor who plays Alex on Roswell, New Mexico looks awfully familiar, which has fans questioning where they've seen him before.

Tyler Blackburn is doing a amazing job of bringing an emotional character like Alex to life, but some viewers might recognize him from his role as bad boy Caleb Rivers on Pretty Little Liars and its spin-off series, Ravenswood. He’s was also featured on a number of other popular TV series, including Days of Our Lives, Charmed, and Cold Case

On Roswell, New Mexico, Blackburn plays Alex, a human Air Force veteran who is in love with an alien genius, Michael. In an interview with Entertainment Weekly, the actor talked about what drew him to the role and how the character was updated from the 90s Roswell version. “I feel like the coolest thing that made this very relevant was all of the different topics that were covered, including Alex being gay, including him being in the Air Force as a gay man, his struggle with his own identity, and his struggle with his own emotions towards someone who he feels like he can’t really be with easily,” said Blackburn. “I just found that all to be very appealing. It gets juicer and juicer too, so it’s really cool to play the progression.”

Blackburn also told the outlet that he has been working with show writers to come up with more aspects of Alex’s backstory, which fans can expect to see in Season 2. “One of my favorite things about this whole process was how collaborative it actually was among the actors and also with the writers and with Carina (Adly MacKenzie, show creator),” he told EW. “It was fun to sit there and create backstory that isn’t in this season. Some of it’s known by Carina or the writers and we’re just not finding out quite yet, so to get those definite answers was good too. Like, how did he lose his leg? And just learning a little more about that.”

Along with learning more about Alex’s past, fans are hoping to see his relationship with Michael continue to progress. When talking to Bustle, Blackburn admitted he didn’t realize how much fans would ship this pairing, but he’s just as excited as they are to see it flourish. "I just didn't know that the 'ship ... was going to be quite so big," Blackburn said. "It normalizes a gay relationship in a way that is very necessary and the response to it being as good that it is just really warms my heart because it makes me realize there is growth happening — Especially in younger audiences."

After finding out about his troubling past, fans have a little more insight into how and why Alex does things. Hopefully, with Alex and Kyle now teaming up to sleuth around town, fans will be seeing much more of him as the season progresses.