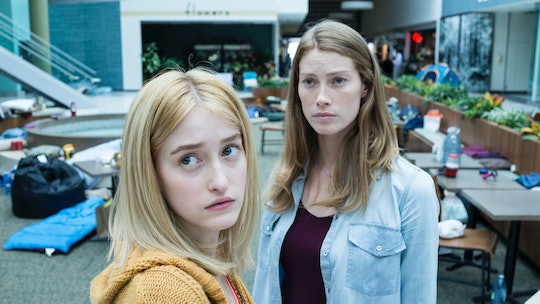 Alex From 'The Mist' Comes From A Talented Family

Once upon a time, made for TV movies based on Stephen King novels were four-day-long affairs, often following the release of the book fairly closely. But now Spike TV is taking its love for King one step further and unleashing an entire series solely dedicated to one of his most popular stories. No, I'm not referring to It. (Thank goodness.) I'm talking about Spike TV’s new series The Mist, based on King’s story of the same name. However, this rendition will include all original characters, one of whom is Alex, the special teenager immune to the mist’s powers. So, who plays Alex on The Mist?

Gus Birney is a relatively new actress, but she comes from a family of accomplished and talented actors, so she’s definitely not new to show business in general. You might recognize Birney from the movie Darcy or an episode of Chicago Med, but she’s also a talented stage actress, much like her dad Reed Birney, who is a Tony Award-winning Broadway actor. Additionally, her mom is Screen Actors Guild Award-winner Constance Shulman (Yoga Jones on Orange is The New Black).

Some of Gus’ own theater credits include the 2016 production of Connected and The Rose Tattoo with Marisa Tomei, but playing Alex on The Mist gives the actress the chance to be part of a new series from the ground up, and the first series she’ll be acting as a regular cast member.

But, according to Interview Magazine, Gus has been acting since she was 13 and landed her first gig on a Clean & Clear commercial. "I had no idea how I got it, because I went into the audition and I thought Clean & Clear was a shampoo," Gus told the magazine. "I was like, 'I use it all the time. My hair feels great.' They were like, ‘You do realize this is an acne solution.'" Even so, it was the beginning of a successful career for the 17-year-old actress.

Growing up with parents who are stars themselves might be intimidating to some, but Gus seems to have seen it as an easy way to decide what she wanted to do with her own life, aside from modeling for Kanye West and other designers. "They probably would have preferred me to go an easier route," she admitted to Interview, referring to her parents. "I just think, what else would I want to do?"

Playing Alex on The Mist is definitely a big break for Gus as far as small screen acting goes, and if the show can do well enough with all of these original characters, it might lead to even more parts for the young actress, who already seems talented and determined enough to make that happen.