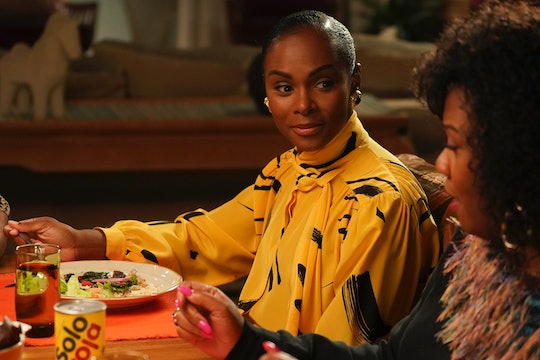 Black-ish is trying its hand at a second spinoff series after last year's grown-ish made a successful debut on Freeform. Mixed-ish, by contrast, is set in the 1980s and serves as a prequel to black-ish, focusing on a young Rainbow Johnson's family. With a white dad and a black mom, "Bow," as she's affectionately called, is forced to navigate suburban alienation and othering while her parents try their best to assimilate-but-not. Tika Sumpter, who plays Alicia on mixed-ish, tackles the role of Bow's mom while Saved by the Bell's Mark Paul Gosselaar plays Bow's dad, Paul.

Sumpter is a two-time NAACP Image Award nominee who got her start on the ABC soap opera One Life To Live in the late-'00s, according to her IMBb page. She went on to play Raina Thorpe on Season 4 of The CW's Gossip Girl, followed by playing Jenna Rice on Seasons 4 and 5 of The CW/BET's The Game. She has also played Candace Young on Tyler Perry's The Haves and the Have Nots since 2013. Sumpter is slated to reprise her role as Angela Payton in the upcoming movie Ride Along 3, which has yet to get a release date, but film audiences are guaranteed to catch her in 2020's Sonic the Hedgehog movie.

On mixed-ish, Sumpter plays Alicia Johnson, mom to Rainbow (Arica Himmel), Santamonica (Mykal-Michelle Harris), and Johan Johnson (Ethan William Childress). After raising her children on an idyllic commune with her partner, Paul (Mark-Paul Gosselaar), Alicia and her family are forced to pivot lifestyles when the FBI condemns the commune as a "radicalized cult." The "elders" are incarcerated and the Jackson-Johnsons move into a suburb to try and find some semblance of normalcy after the tumultuous raid. Unfortunately, the kids have had approximately zero exposure to the racial attitudes of the world outside the commune, and they're forced to navigate their new fish-out-of-water status with little useful guidance from their hippie parents.

"My parents had sent us out into the world with absolutely no warning that being mixed was even a thing!" Tracee Ellis Ross, who narrates the series as adult Rainbow, laments in the trailer.

"You have to understand: today's mixed kids can look up to rappers, ballerinas, athletes, a president, and a princess," she adds over a photo montage of Drake, Misty Copeland, Colin Kaepernick, Barack Obama, and Meghan Markle. "The only heroes we had were Da Barge."

Sumpter's casting in the series has stirred up some controversy from those calling it a "Reverse Aunt Viv" situation (referring to The Fresh Prince of Bel-Air recasting the role of Aunt Viv from Janet Hubert to the lighter skinned Daphne Maxwell Reid in Season 4). Anna Deavere Smith, who's noticeably lighter skinned than Sumpter, plays the older version of Rainbow's mom Alicia on black-ish. Black-ish and grown-ish already field criticism for their handling of colorism, per HuffPost, and this casting choice doesn't exactly set mixed-ish apart.

For her part, Sumpter responded to the criticism in an interview with The Root, saying, "I don’t know if it’s ‘Reverse Aunt Viv’, but what I do know is the creators of the show wanted to serve the story and the story for them is fully-rounded with a brown-skinned woman as the mom."