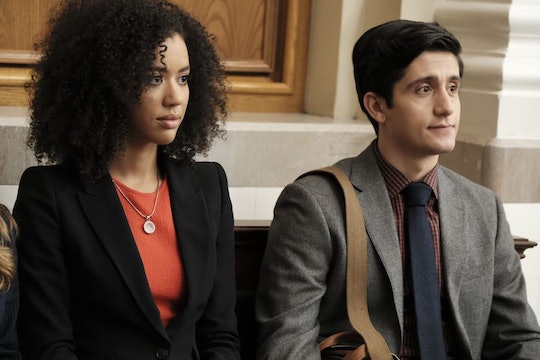 Shonda Rhimes' "Thank God It's Thursday" programming will now begin on Tuesdays with the new series, For the People, which Rhimes executive produces. The new courtroom drama will follow young attorneys as they join the highest court in the land as district attorneys and public defenders. On Team Public Defenders is Allison Adams, but who plays Allison on For the People? Jasmin Savoy Brown nabbed the role.

Although For the People stars a number of newcomers, Brown isn't one of them. She's been working on television for years now, getting her start on shows like Grimm, The Fosters, and Brooklyn Nine-Nine, before she got a recurring role on Freeform's popular sci-fi drama, Stitchers. Following Stitchers, Brown acquired her first role in Shondaland on Grey's Anatomy as a defense attorney. If you don't recognize her, she was the lawyer who represented the woman in prison that Arizona, Bailey, and Jo went to help back in Season 13.

Since then Brown has had a lead role on HBO's hit series The Leftovers and a recurring role on the short lived TNT drama, Will. You could also find her on the recent season of Netflix's dramedy series, Love, as Annie. She's additionally appeared in the films Lane 1974 and Newly Single.

Originally, Brown wasn't going to be in For the People, however soon after the series was ordered to series her character, as well as another, were recast. Previously, Allison was going to be played by Lyndon Smith, from Parenthood, who can still be seen in the original trailer for the series. However, after the filming of the pilot, showrunner Paul William Davies decided to recast the role as well the part of Sandra, who will now be played by Britt Robertson. But regardless of how Brown ended up stepping into the role, she's obviously worked hard for it and it'll be great to see her playing such a pivotal character.

When Brown isn't busy killing it onscreen, she's an advocate for women's rights, specifically in regards to women's health. In an article she wrote for As Told By Women, Brown opened up about her seven year struggle with endometriosis, in which she visited multiple doctors who all told her nothing was wrong with her and it was just her period causing her pain. Thankfully, with the help of a friend, she found a doctor who was able to finally diagnosis her and it was revealed that she had cysts on her fallopian tubes, which she was able to get surgically removed.

Now Brown speaks out about how astronomical that surgery cost ($70,000, which she was able to pay for thanks to her insurance) and how important it is to speak out about your pain and continue to seek medical attention, even if you're called "dramatic" for doing so.

Brown is also very open about growing up in a predominantly white neighborhood with only a white mom, and discovering her blackness later in life. In an interview with GQ, Brown said that journey of discovering that whole other side of herself has also been a part of her "acting journey" as well, specifically when she's told things like "you need to blacken that up for roles." She also mentioned that she "maintains that sense of my identity through my hair."

"I leave my hair natural on TV, and at this point in my life and my career I want to be representative," she added. "I didn't see myself represented when I was a kid. There was no one who looked like me on TV. And if they were, they were seldom a beautiful or strong character."

Although Brown obviously stays busy, when she does have some down time you can most likely find her hanging out with her dog and/or her girlfriend. You can see Brown on For the People when the series premieres on Tuesday, March 13 at 10 p.m. EST on ABC.