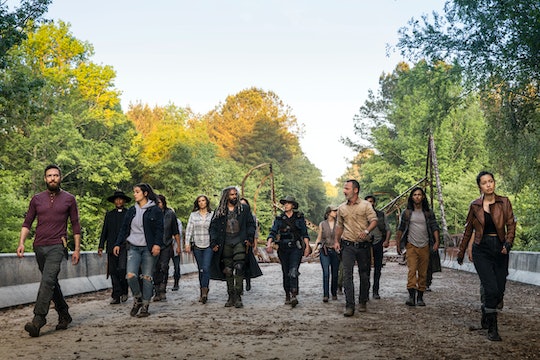 Fans Will Be Terrified Of 'The Walking Dead's Worst Villain Yet

It's finally time for The Walking Dead to start back up. Even though the show is in its ninth season, fans are still deeply invested due to major plot twists and new characters to go with them. For example: The Whisperers, who seem to be the new "big bad" for everyone's favorite survivors. Who plays Alpha on The Walking Dead? Samantha Morton is an Oscar nominee who's joining the cast.

Samantha Morton is an English actress who earned Oscar nominations for her roles in 1999's Sweet and Lowdown and 2002's In America. Her IMDb runs the gamut; she's starred in a variety of films and shows, ranging from the heart-wrenching drama Minority Report to the very cute kids' show, Max & Ruby. Recently, she starred in Fantastic Beasts as Mary Lou Barebone and Harlots, a Hulu show about the sex industry in the 1700s.

It's safe to say then that Morton has the chops to pretend to fight CGI zombies and roam the set as if it's the apocalypse. Morton plays Alpha, who was an antagonist in The Walking Dead comics and I'm sure will be one in the television adaptation. In an interview with Digital Spy, producer Greg Nicotero talks about Morton's performance as Alpha. "I can tell you now, Samantha Morton terrifies me every single day," Nicotero said. "I see her on set as Alpha and she's chilling." Alpha is the leader of the Whisperers, a group of survivors who disguise themselves as zombies.

In another interview, Nicotero took it a step further and said Alpha is the greatest villain to ever be on The Walking Dead. What's getting the headlines — and fan attention — is the departure of Rick Grimes, the protagonist of The Walking Dead up until this point. Given that the show has followed Rick from the beginning, some fans may be upset at the direction the show is taking. Nicotero, though, believes that if some viewers stop watching because Rick is gone, that they're missing out:

If they don’t stick around post-Rick, they’re going to miss out on probably the greatest villain The Walking Dead has ever had. That would make me really sad. I have some unbelievable pictures of Alpha in my phone. I’ve been begging [writer and producer] Scott Gimple and AMC to let me post it. It’s a whole different flavor. It’s such a great story. I love the Whisperers in the comic book and I think they’re better on the show.

So while fans may be upset that their beloved Rick is gone, they can take heart that The Walking Dead will feature new characters, Alpha included. This new feel for the show is evidenced by the new opening credits to The Walking Dead, which are animated as opposed to all the other photo-based credits of the first eight seasons. The new look goes along with executive producer Angela Kang's promise that The Walking Dead was "starting a new chapter" in Season 9. Kang told Entertainment Weekly that the producers are exploring what society would look like once infrastructure has faded away. "There’s a fun Western vibe that has emerged," Kang told EW. "We are going into a period where a lot of the things that we’ve seen in previous seasons have broken down, so they’ve got these horses and carriages that are being drawn around instead of cars. Things are lit with oil lamps. People are using different kinds of weaponry. There’s a real grittiness to it that I think will be fun and fresh for the viewers."

Tune in to an all-new episode of The Walking Dead on Sunday, Feb. 10 at 9pm ET on AMC.