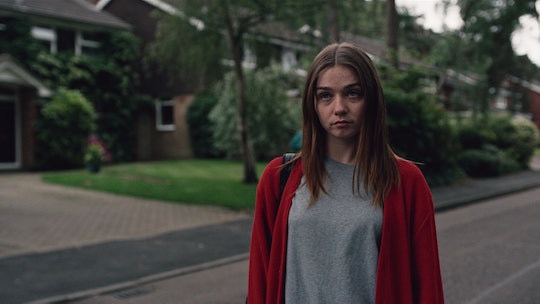 The end of the world has arrived... on Netflix anyway. The new dark comedy, The End of the F***ing World, follows two teens who end up taking a road trip together and fall in love, but this isn't your typical love story. One of those teens, James, is a self-diagnosed psychopath, while the other, Alyssa, is a rebel without a cause just looking for her real dad. So who plays Alyssa on The End of the F***ing World? You may very well recognize her.

Jessica Barden, a 25-year-old actress from North Yorkshire, England, plays 17-year-old Alyssa. Barden got her first TV role back in 1999 on the show My Parents Are Aliens. Following that she had a few parts in other TV series and movies before getting her first big role on Coronation Street, a popular UK soap opera. Barden played Kayleigh Morton for over 70 episodes of the series.

Following that, Barden was cast in a number of projects on the big screen and appeared in Tamara Drewe, Hanna, Comedown, and In the Dark Half. She then had a recurring role on the TV series, Chickens, and the TV mini-series, The Outcast. She later went on to do a number of short films, including the original short film of The End of the F***ing World, which was shortened to the acronym TEOTFW at the time. When the short film was made in 2014, the graphic novels that it was based on (written by Charles "Chuck" Forsman), weren't done yet so Barden went on to participate other projects, including the film Far from the Madding Crowd.

She was later cast in the third and final season of Showtime's original series, Penny Dreadful, where she played Justine. After Penny Dreadful, Barden appeared in the BAFTA-winning TV movie, Ellen, and a number of other films before being asked to return to her role as Alyssa in The End of the F***ing World, which got picked up as a TV show.

Barden told The Scotsman that it was "a dream come true" to return to the project and work for Netflix and Channel 4, the UK channel the show first aired on back in October of last year. "It's my favorite job I've ever done," she said.

Her original costar was Craig Roberts in the role of James, but for the new series Black Mirror actor Alex Lawther takes on the role. After The End of the F***ing World, Barden will return to the big screen this year in the film The New Romantic, which is about the phenomenon of "sugar babies," who are women looking for benefactors to fund them in return for their attention. You can also see her in Scarborough, which is due out sometime this year as well.

When she's not hard at work, Barden likes to have a fun time. Based on her Instagram, she enjoys going to casinos, hanging with her gal pals, and just doing funny things. Honestly, if you're not following her on Instagram you definitely should; she'll make your day. She currently shares a flat with a number of other actors, but as she told The Scotsman, they all travel so much they don't even own a TV. "I watch Netflix and Amazon all the time — I love Orange is the New Black and watch all my films on there," she confessed. I think we can all relate.

You can now see Barden in The End of the F***ing World as Alyssa. The show is now streaming on Netflix, and you won't want to miss it!