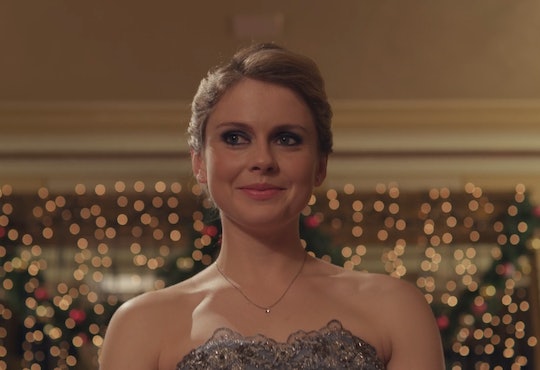 Amber From 'A Christmas Prince' Should Look Very Familiar

A Christmas Prince is the new Netflix holiday movie that you can't help but love. The premise is simple. Amber, a young journalist, goes undercover at the castle in Aldovia to get closer to Prince Richard, so she can hopefully get a scoop on whether on not on he'll abdicate the throne. However, while getting to know him, she falls in love. So who plays Amber on A Christmas Prince? The actress may look very familiar.

If you're a fan of iZombie, you probably recognized Amber right away. The lead actress on the show, Rose McIver, plays the young journalist and it's so interesting to see her go from eating brains to living in a castle, especially when you add the fact that McIver is originally from New Zealand. McIver has totally gotten the American accent down and it's almost hard to believe she's not American, but that's what makes her such a great actress.

McIver has been starring on iZombie as Olivia Moore for all three seasons, and she'll be returning for the fourth when it comes back next year. On the show, McIver gets to play different roles each week because when her character eats brains, she takes on the personality of that person.

But if you haven't seen iZombie (which you totally should watch), that's not the only prominent small screen role she's been in recently. You may also recognize McIver from Once Upon a Time, where she's had a recurring role as Tinker Bell.

McIver also spent some time on Masters of Sex as Vivian Scully, the daughter of Barton Scully, and on the short-lived TV series Play It Again, Dick, where she portrayed multiple characters. Back in 2009, McIver also starred in Power Rangers R.P.M. as Summer Landsdown and the Yellow Ranger, however the show only lasted one season.

Other various credits to her name include the likes of: Super City, Maddigan's Quest, Xena: Warrior Princess, CSI: Crime Scene Investigation, P.E.T. Detectives, and Hercules: The Legendary Journeys. She's also been in a few Disney Channel Original movies including Johhy Kapahala: Back on Board and Eddie's Million Dollar Cook-Off.

McIver's acting hasn't been limited to the small screen, however. In 2009, she played Lindsey Salmon, in the movie The Lovely Bones, which was based on the bestselling book of the same name. She additionally had roles in Queen of Carthage, Brightest Star, Blinder, Predicament, and Ozzie. Besides the new season of iZombie, you can next see McIver starring in the film, Brampton's Own, alongside Alex Russell and Spencer Grammer.

When she's not killing it on screen, though, you can find her in the dance studio. The 29-year-old loves to dance and often shares videos of the choreography she's learned on her Instagram page. She's obviously a big fan of hip-hop and goes to Harbour Dance Centre to dance her heart out. The studio is in Vancouver, Canada, in case you want to check it out.

She doesn't just keep her dancing in the dance studio though. McIver can also be spotted dancing on the set of iZombie and getting her castmates as well as the crew to join in with her as she learns new moves.

Honestly, it looks like McIver just loves to have a good time and I'd definitely like to spend a day or two just basking in her presence. Since the likelihood of that happening feels slim, I'm just going to continue scrolling through her Instagram feed, and pretend like we're best friends.

Make sure to check out McIver in A Christmas Prince, which is now streaming on Netflix.