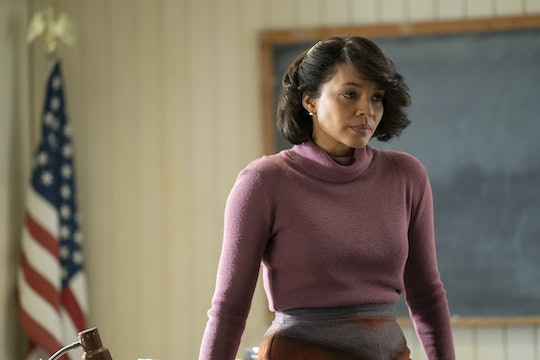 When True Detective Season 3 premieres on HBO on Jan. 13, it introduces its audience to an entirely new cast of characters. Mahershala Ali stars as a detective investigating missing children in a decades-spanning case, but he's not the only acclaimed actor in the cast. Female lead, Amelia Reardon, is sure to be familiar to viewers as well. But who plays Amelia on True Detective?

Carmen Ejogo is a British actress and singer who previously played Coretta Scott King in Selma. She also plays Seraphina Picquery in the Fantastic Beasts and Where to Find Them movies. In the last few years, she's appeared in It Comes at Night, Alien: Covenant, and Roman J. Israwl, Esq., as well as Season 2 of the show The Girlfriend Experience. After True Detective, she'll be lending her voice to The Voyage of Doctor Dolittle and appearing in the movie Rattlesnake.

On True Detective, Amelia is a teacher connected to two students who go missing in the 1980s. This brings her into contact with Ali's Detective Wayne Hays, who questions her about the kids. The trailer for Season 3 makes it seem like the two become closer over the course of the investigation, with Ejogo's character haunting Wayne years after the story starts.

Ejogo started off as a child model and actor, with her first role coming in the form of a small part in the film Absolute Beginners. She went on to appear in the miniseries Cold Lazarus and the film Metro as she got older, later working with Kenneth Branagh in Love's Labour's Lost, a film that allowed her to express her musical abilities as well. She even played Coretta Scott King once before Selma, in the TV movie Boycott in 2001.

She told The Guardian that her career experienced a lull after she took a brief break to have children with then-husband Jeffrey Wright (whom she has since divorced). "The industry wasn't really ready for someone who looked like me, to put me at the helm in any kind of way," she said, attributing that to both her ethnicity and her age. She felt that she was receiving better roles now that she was older than she had in her 20s.

Ejogo is biracial (her father is Nigerian and her mother Scottish), which limited the kinds of roles being offered to her early in her career. She explained that she wasn't given the opportunity to take part in period pieces or romcoms, and that she was once shut out of a franchise film in the '90s because the studio head didn't know what to do about her curly hair. After moving to New York in 2001, she began to work more often in the United States than in London, which might have left viewers more familiar with her American accent than her real one.

An interview with The Aquarian touched on Ejogo's career renaissance of the last few years, with her saying that she felt "very fortunate to be able to have the kind of career that I want." It doesn't seem like her already impressive filmography is slowing down again any time soon, so fans should expect to see more Ejogo after True Detective Season 3 concludes.