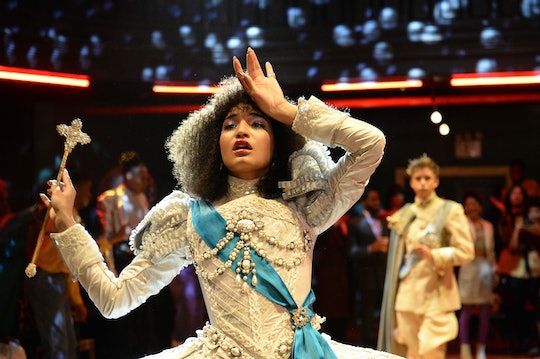 Angel is one of the stars of Pose, a young woman trying to figure out her place in a world that has denied her so much. The House of Evangelista is her family and together they stun at balls where they parade in outfits that capture everything from royalty to weather girl realness. She also has a complicated relationship with businessman Stan Bowes. But who plays Angel on Pose?

Actress Indya Moore is so good as Angel that it might be a surprise to learn that she hasn't been acting for very long. In addition to Pose, she only has two credits to her name: the indie movie Saturday Church (which Pose co-star Mj Rodriguez also appeared in) and a short called Spot. Previously, Moore was a model, landing jobs with Gucci, Dior, OAK, Ab, GQ, Marquise Foster, and Blackmamba, according to Afropunk. She also starred in the music video for "Don't Pull Away" by J. Views and Milosh, which "exercised my acting dynamic," as she told NBC News.

In an interview with Afropunk, Moore explained that she was "kind of pushed" in the direction of modeling, though she "honestly didn't think that it would be possible for me as a trans woman of color." She had a lot of success in the field, but she didn't always have good experiences.

Moore found certain aspects of fashion limiting, telling NBC News, "I want to see designers capitalize on a beauty that is not only white. I need them to stop acting like beautiful black and brown women do not exist." Acting could be similarly limiting, without much variety being made available to Moore. She mentioned to NBC News that in "almost every film or movie, the trans person is always depicted as... a sex worker with no way out."

Initially, she wasn't necessarily drawn to the role of Angel on Pose. According to the New York Post, she was considering trying out for Blanca, who she felt was "more humble" whereas Angel "felt very shallow." Moore went on to say, "I didn't know much about her. She was just this pretty girl who wanted a normal life as a trans girl." But once she read for the part, it was clear no one else could play Angel; she was immediately offered the role without even having to do a screen test.

And she soon connected with Angel. "She has a mind of her own, she stays true to herself, and she has a really big heart," Moore told the Post. She had also "felt a lot like Angel" in the early days of her career, sharing the same dreams of a stable job and positive personal relationships. Moore had faced transphobia growing up in the Bronx and separated from her family when she was only 14 years old, living with foster families for several years.

She has since reconnected with her parents, but her experiences have informed her performance and strengthened her dedication to telling Pose's stories. Moore told Time Out:

It's affirming to be able to tell these stories, because it's not seen as alien. I don't have to feel like there's something wrong with me for not having the privileges that others have had in their lives, that have kept them safe in the ways that I wasn't. It's very affirming, it's really therapeutic. You can't pull this out in acting class. I feel really fortunate to have gone through what I've gone through and to use my vessel to encompass the spirit of these characters in a way that I probably otherwise wouldn’t be able to had I not had the experiences that I did.

She went on to say that "the humanization of Angel has helped me to feel not ashamed of myself but more proud in ways that I never realized that I wasn't." Pose is an important show that breaks new ground and its cast provides much-needed representation. But more than that, its actresses breathe life into characters who demand (and deserve) to be seen.