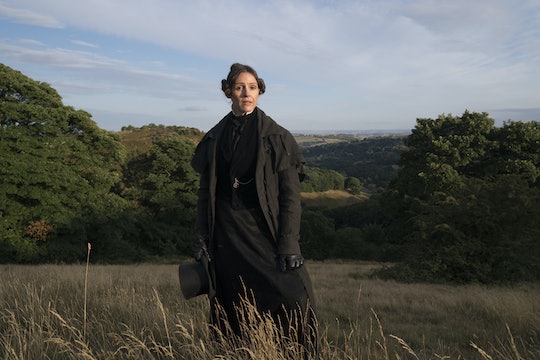 BBC and HBO have teamed up to give Anne Lister, colloquially known as "the first modern lesbian," the miniseries treatment with Gentleman Jack, an eight-part series from creator Sally Wainwright. The star has some pretty big historical shoes to fill, so viewers may be curious about who plays Anne Lister in Gentleman Jack. Suranne Jones is a staple of British television, but she may not be recognizable to American audiences just yet.

Jones cut her teeth on the iconic British soap opera Coronation Street, according to her iMDB page, which has been on air since the 1960s. She acted in 260 episodes of the popular drama from 1997 to 2004.

Since then, Jones went on to star in a slew of drama series, including Vincent, Strictly Confidential, and Harley Street, but it wasn't until 2009 that she landed what was considered to be her breakout role playing a murderer named Ruth Slater on the Halifax-set miniseries Unforgiven. Gentleman Jack, some viewers may notice, also takes place in Halifax, and the connection isn't a coincidence. Unforgiven was also written by Wainwright, who grew up in the town near the real life Lister's estate. In fact, Gentleman Jack marks the fourth production Jones and Wainwright have worked on together. A 2017 Independent article even called Jones "a core member of Wainwright’s unofficial repertory company."

Wainwright was also a writer on Coronation Street during Jones' tenure as well as a police procedural called Scott & Bailey, which also starred Jones. In fact, Jones herself helped conceive the idea for the series and served as its executive producer for Scott & Bailey's fifth and final season. After that, Jones landed the title role of another British drama Doctor Foster, which ran from 2015-2017. Jones earned her first and only BAFTA Award for her work on the series in 2016, and it is perhaps the role for which she is best known.

More recently she did two episodes of the Amazon Prime series Vanity Fair, based on the 1848 novel of the same name, so Jones is a hot commodity in the period drama world right now. She also has plenty of stage experience, including a West End production of A Few Good Men, as well as several other regional credits in The U.K.

Jones says the experience of playing Anne Lister, especially under the guidance of Wainwright, who has been working to get the project made for 20 years, was deeply moving. In an NPR interview ahead of the premiere, Jones explained:

Sometimes when you get a part, you're almost cooked, you're ready to go...but with this, both me and [writer and director Sally Wainwright] felt like I was a work in progress, and I was going to have to put a lot of work in...I was able to visit Halifax library and actually take out one of Anne Lister's original diaries and read that for myself, which was a real emotional experience, because I'm touching the paper which she had her hands all over.

She may not have gone full method à la Daniel Day Lewis in Lincoln, but Anne Lister clearly means a lot to Jones. And one can only assume that comes across in the show.