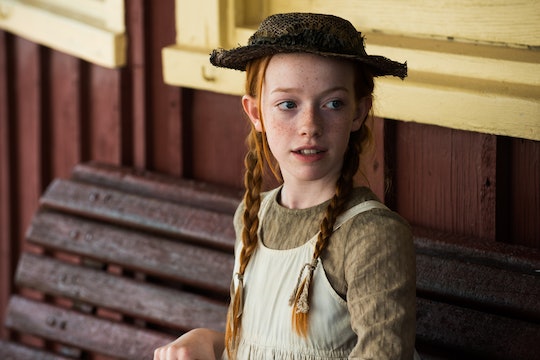 'Anne With An E's Star Is Poised For Her Big Break

Netflix is serving up a much-anticipated reimagining of Lucy Maud Montgomery's series Anne of Green Gables, titled simply, Anne. The show has already aired in Canada, where Montgomery's books, set on the picturesque late-1800s Prince Edward Island, are a cultural staple. And starting May 12, Netflix users get a chance to join in on the fun when the seven-episode first season drops. It's the first of a hoped for five-season arc by showrunner Moira Walley-Beckett, a Canada native who was also a writer on Breaking Bad. Naturally, she has a fresh take on the story, but who plays Anne on Netflix's Anne with an E? Amybeth McNulty snagged the part and beat out 1,800 other girls for the role.

The 15-year-old Irish-Canadian actress submitted her audition online from her hometown of Donegal, Ireland. Her mom is Canadian and McNulty, of course, voraciously read the books when she was nine. (Appropriately, according to her Twitter bio, she's Hufflepuff-identified.) "[Anne] has so much love for the world, which I think I share with her," McNulty told CBC of her similarities to the classic character. "And her curiosity about everything, how she can be so fierce and so bold but so gentle and so loving."

Anne of Green Gables' most popular on-screen adaptation by far was the 1985 CBC miniseries starring Megan Follows as Anne. American audiences of a certain age probably remember growing up with it airing regularly on PBS. But Walley-Beckett's reimagining aims for something new.

She wrote every single episode of the first season herself and, with her gritty cable drama background (she wrote the iconic Breaking Bad episode "Ozymandias"), she took a deeper approach with Anne. Rather than taking advantage of the opportunities for a gorgeous period drama in a beautiful setting, Walley-Beckett focused on how grueling life on a farm would have been at the turn of the twentieth century in Canada. She also opted to showcase how Anne's psychological trauma — as an orphan whose adopted family initially rejected her because she wasn't a boy — would have affected her daily life. Said Walley-Beckett of what McNulty brings to the character: "She's riveting on screen, she's translucent. You can see every thought and every emotion."

McNulty has been on a couple of Irish TV series, Clean Break and Agatha Raisin, as well as the BBC show The Sparticle Mystery, but Anne is poised to be her biggest break by far. Hopefully, we'll get to watch her grow into Anne's story over the course of Walley-Beckett's wished for five seasons. But for now, it's cool enough to get a refreshed version of young Anne Shirley.