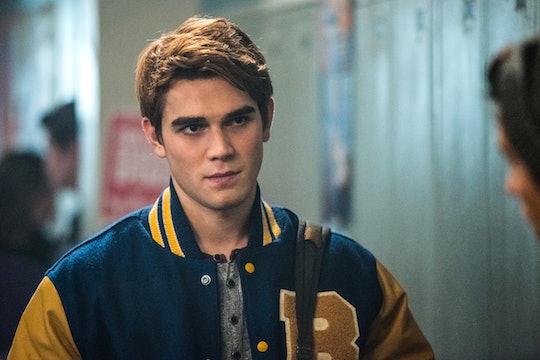 'Riverdale's Archie Is A Star On The Rise

Like other stories before them, the Archie comic books will be getting The CW treatment as the network gears up for the Jan. 26 release date of Riverdale, based on the characters of the famed comic book and cartoon from years' past. But where it could have gone wrong, Riverdale actually looks like it's going to be a strong standalone series, starring an Archie who isn't even a natural red-head. But who plays Archie on Riverdale anyway? K.J. Apa isn't a super well-known actor, but the New Zealander costars in the upcoming film A Dog's Purpose, which has gained a lot of attention in the press recently because of an alleged video surfacing regarding the mistreatment of animals during filming.

Riverdale on The CW will be Apa's first American TV series and, above all else, he's apparently excited to play a high school jock. In an interview with Media Village, Apa said, "I always wanted to wear that uniform as a kid and I finally get to do it. There are no [football] teams in New Zealand so there’s no way I could’ve ever worn it." Before Riverdale, Apa appeared in the series Shortland Street and The Cul de Sac, but this will be the 19-year-old's first series in the States.

Riverdale comes to the CW at the perfect time, when the network's resident sexy, supernatural show, The Vampire Diaries, is coming to an end. So don't let the fact that these characters are based on the light-hearted comic book ones from the '70s deter you. Riverdale promises to serve up mystery, sex, and teen drama in its new series with Apa at the helm. So besides a new and possibly improved Archie, who is he?

No one ever said that in order to be a successful celebrity you have to be musically inclined too, but it certainly helps. Apa and co-star Asha Bromfield, who plays Melody Valentine (lead singer of Josie and the Pussycats) on Riverdale, recently released a cover of Rae Sremmurd's "Black Beatles," but they are both performers outside of the show as well.

He Can Be Inspirational

Apa is fairly present on social media, posting mostly funny anecdotes and only sometimes being very serious. But this tweet in particular demonstrates just how inspirational he can be for his fans.

He Started Out In Modeling (Sort Of)

According to TeenVogue.com, Apa got his start in show business when his mom signed him with a modeling agency. But, as Apa recalled, he never got any work through the agency. Instead, his big break came in the form of landing a role in the nighttime soap opera Shortland Street, but he definitely knows how to take a great pic regardless.

You can't get too far on Apa's social media accounts without seeing photos with his mom, dad, or older sisters and it's ridiculously endearing. Filming Riverdale in Vancouver obviously took him far away from family, but it's all for the good of teen drama.