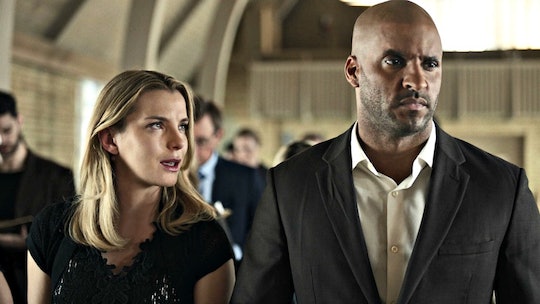 Audrey On 'American Gods' Has A Familiar Face

On Sunday, April 30, the adaptation of Neil Gaiman's American Gods premieres on Starz and you're probably going to to want to brush up on some of the characters if you plan on understanding what the people in your office are talking about. The series will center around a forthcoming battle between the old mythological gods and the modern gods that today's society now worships (Media, Technology). There are also a bunch of recognizable faces in the series, like the character of Audrey Burton, played by Betty Gilpin in American Gods. You might remember Gilpin from Showtime's Nurse Jackie, in which she played Carrie Roman, the female resident who showed up a few seasons in, wasn't very good at her job, and fought with Edie Falco's Jackie. She was the "hot doctor," if you will.

In American Gods, she's playing Audrey, who could be loosely characterized as Laura Moon's (played by Emily Browning) "drunk friend." Or, at least, that's what Gilpin herself thought when she described her character at a SXSW panel sponsored by Nerdist. But essentially, Audrey is Laura Moon's BFF — or rather ex-BFF. "We're still figuring that out," Gilpin joked, adding that when she was cast she assumed she was going to be a trope-y hot mess friend character, but then went into film the pilot and was taken aback. Things escalate very, very quickly in American Gods, so you're going to want to keep up.

Laura had an affair while her husband, Shadow, was in jail and is dead when the series begins. This much you can know: she comes back and is chasing her love around to get him back, while she's literally falling apart in the midst of decomposition, carrying her arm around. Whether Audrey helps or hurts her in this endeavor will be the source of some drama for sure.

Gilpin has also had story arcs on Showtime's Masters of Sex, CBS' Elementary, and PBS' Mercy Street. But this summer might just be her moment. In addition to American Gods, which is bound to captivate that Sunday night TV crew, she's also in Netflix' G.L.O.W., which premieres this June. G.L.O.W. was created by Jenji Cohen (Orange is the New Black) and is a comedy about women's wrestling in Las Vegas. Allison Brie (Mad Men, Community) and comedian Marc Maron are also in the 10-episode show. So Gilpin knows how to do to the fantasy-drama in addition to bringing the laughs.

Get used to seeing her around, because both shows are likely to be runaway hits.