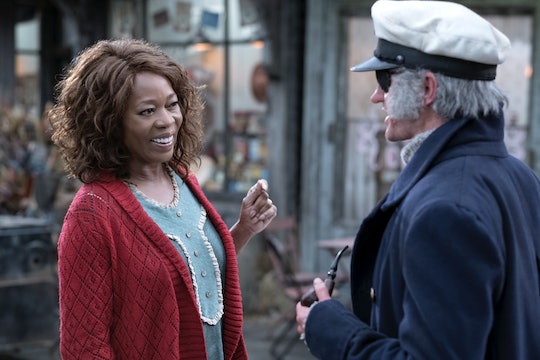 (Warning: this post contains unfortunate spoilers from Episode 5.) Netflix's new and highly anticipated show, A Series of Unfortunate Events, is finally here and it's just as great as I hoped it would be. The series sticks pretty close to the books, the narrative style is fantastic, but best of all the characters and the actors who play them are phenomenal. The Baudelaire children, who became orphans after their parents "perished in a fire," have been bounced around from guardian to guardian, and of course each of those guardians are unique and lovable quirky in their own ways, including their Aunt Josephine. So who plays Aunt Josephine on A Series of Unfortunate Events? Alfre Woodard plays the fearful and formerly courageous woman.

The award-winning actress is very well known and you'll definitely recognize her. Whether on the big screen or the small screen, Woodard has starred in almost everything. Most recently you may have seen her in another Netflix original series, Luke Cage, as the villainous Mariah Dillard. She's also appeared in the shows Stare of Affairs, Copper, True Blood, Grey's Anatomy, Desperate Housewives, and many more. The list of films she's been in is just as long and includes the likes of Captain America: Civil War, 12 Years a Slave, The Family That Preys, Take the Lead, Something New, Beauty Shop, and Love & Basketball. Woodard has played numerous roles, but in A Series of Unfortunate Events, her character Aunt Josephine may be the strangest role she's ever played thus far.

Although Aunt Josephine is said to be formidable, courageous, and the one person that can finally give the Baudelaire's answers about their parents, it turns out she's none of these things at this point in her life. Instead, she is incredibly frightful and a stickler for grammar. After the unfortunate passing of her husband, Ike, Josephine stopped going on adventures and instead prefers to lock herself in her home, hiding from everything that scares her. This list includes doorknobs, fires, anything hot, wood, and so much more. You name it — she's afraid of it.

Her love (or obsession) with grammar also began after the death of her husband. Obviously needing something to do that wasn't so scary, she became very interested in the English language and even had a secret part of her library that was filled with just grammatical books. Of course, for the Baudelaire children who are already smart in their own right, they found Josephine's endless corrections of their grammar infuriating. Truthfully, so did I.

Still, Josephine tried her best as a guardian and although she was a bit annoying, she was also loving. Unfortunately, she — like most of the other guardians before her — may not stick around for much longer.