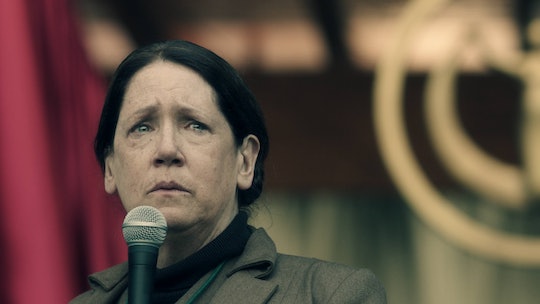 Aunt Lydia Is No Ordinary Aunt On 'The Handmaid's Tale'

The Handmaid's Tale TV series is finally here and fans are already enthralled with the dystopian show that tells of a bleak future, especially for women. Based on Margaret Atwood's novel of the same name, the show follows Offred who is forced to become a Handmaid when the United States becomes the authoritative regime known as Gilead. As a Handmaid, Offred is forced to produce children for a Commander because his wife is infertile. The show jumps between the past and present, including Offred's time at the Red Center, where she was at the mercy of Aunt Lydia. So who plays Aunt Lydia on The Handmaid's Tale? Ann Dowd got the role and you're really not going to like her character.

Though Dowd may look a little different in The Handmaid's Tale, fans will probably still recognize her from the various TV shows and movies she's done over the years. Most recently, Dowd has appeared in Girls, The Leftovers, Master of Sex, True Detective, and Law & Order: Special Victims Unit, according to IMDB. She also appeared on House, Law & Order, Judging Amy, Freaks and Geeks, The X-Files, and The Baby-Sitters Club.

On the big screen you may have seen Dowd in Collateral Beauty, Bachelorette, Marley & Me, Alice Upside Down, Garden State, the Shiloh movies, and Green Card. Following The Handmaid's Tale, you can see Dowd in the thriller film Nancy, which is due out next year.

In The Handmaid's Tale, Dowd's character Aunt Lydia is one of the foes Offred faces under the new regime. Although she's called "Aunt" she actually has no relation to Offred or any of the other Handmaids. Instead Lydia, along with the rest of the "Aunts" are tasked with indoctrinating the Handmaids with the beliefs of the new society and "helping" them accept their fates. This occurs at the Red Center, which is really just a re-education center, for the women who are forced to become Handmaids.

Though Aunt Lydia is a part of Offred's past, the harsh lessons she instilled in Offred stick with her even after she's left the Red Center. Though Offred is amongst the women that resist the ideology of Gilead, Aunt Lydia's instructions and slogans still echo on in Offred's head.

While it's easy to see the Aunts as villains, there's been a few examinations of how the Aunts also depict one of the few ways in which women were given power in the new regime. You can decide for yourself whether or not you agree when you watch The Hadnmaid's Tale for yourself. The first three episodes are available for streaming on Hulu beginning April 26.