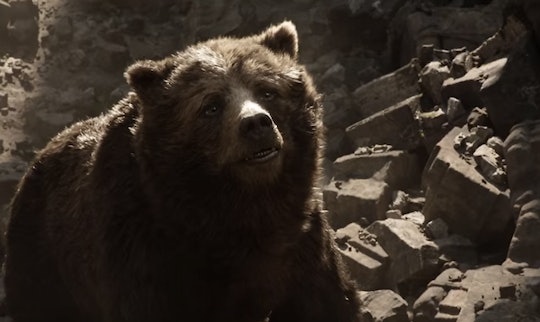 Who Plays Baloo In 'The Jungle Book'? The Voice Is Perfect For The Lazy Bear

The highly anticipated remake of The Jungle Book is now out in theaters, and it's getting great reviews from kids and adults alike. A large part of the appeal of this reboot is its star-studded cast. While there are a number of differences between this version and the animated Disney classic, the same characters bring the story to life. Like the original, there is a character in the new release that steals the show with his wit, humor, and jazzy voice. That is, of course, Baloo the bear. But, who plays Baloo in The Jungle Book? The voice may sound very familiar.

Baloo is voiced by the incredible Bill Murray, and he couldn't be more perfect for the part. Who else has that sort of "Bare Necessities," devil-may-care, laissez-faire? Who else is apathetic, yet caring? Kind, yet sarcastic? Handsome, but pot-bellied? Who else has a smokey, scratchy, cavernous singing voice and loves to make people (including himself) laugh? The only answer here is Murray.

Though the only actor who actually appears on the screen is Neel Sethi (as Mowgli), Murray has been transformed, through the magic of CGI, into an expressive, perceptive bear. The resemblance is uncanny. It's him — his face — but on a bear. The likeness is almost unbearable. (Oh yes.) The result is hilarious. According to director Jon Favreau, "all of this was shot in downtown Los Angeles. The only live-action character person is Neel Sethi, playing Mowgli. The humans are the only things that are real. The environments, the animals — all of that is generated by artists."

Murray's role is familiar territory for fans of his work. He's Mowgli's friend, confidante, and sidekick, but he also gives him space and wants him to learn. At times, he can seem like a bad influence, but he's got Mowgli's best interest as heart. Even though he acts blithe, it's clear he really cares about the man-cub. The Jungle Book is a great film for kids, but the humor and subtlety Murray brings to the film makes it enjoyable for adults as well. For fans of the original worried about this one missing the mark, this remake takes some liberties with the story, but it gets the character of Baloo just right.

As if that isn't enough of a draw to see the film, Murray is joined by the likes of Idris Elba, Lupita Nyong'o, Emjay Anthony, Scarlett Johansson, Christopher Walken, and many more of the best actors working today. At first, of course, you might not recognize them, but you'll definitely enjoy their adorable and terrifying (Elba's Shere Khan, for example) animal counterparts.