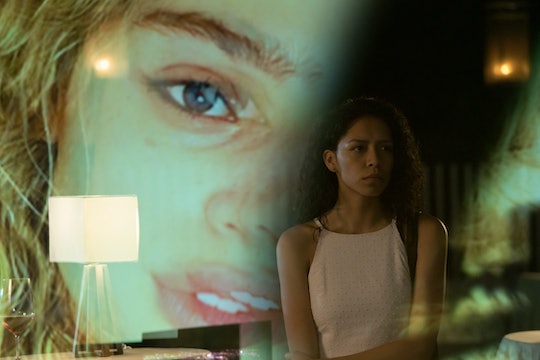 Netflix borrows a page from 13 Reasons Why with its new horror series Chambers by casting two A-listers — Uma Thurman and Scandal's Tony Goldwyn — as a dead teen's parents, while introducing us to a gaggle of new teen actors. So viewers tuning in may be wondering who plays Becky on Chambers. Lilliya Scarlett Reid is playing her breakout role on the series, but she has strong ties to Hollywood.

According to a December 2018 Milk Studios interview, Reid's dad was a TV writer in Los Angeles, and so she spent most of her childhood moving back and forth from LA and her home state of Montana. Eventually, she'd come to spend the school year on the west coast and retreat to Montana for creativity-fueled breaks. She also dabbles in modeling and made a name for herself as a young artist, booking her first solo show at Chainlink in LA at just 18 years old. Reid's preferred artistic medium is paint, though she also occasionally sculpts, and from her Instagram account, you can see that she has a penchant for body horror. Reid names her grandfather, a fellow artist, as one of her major inspirations, but prior to art, she took a serious interest in cooking.

When she was 14, Reid spent two years working in professional kitchens under the tutelage of Jon Shook and Vinny Dotolo at their iconic LA restaurants Animal and Jon & Vinny's. But Reid soon concluded that she couldn't imagine herself working on a line for the rest of her life, and moved on to other interests.

If it seems like Reid's life is packed with adult job experience for a teenager, that's because it is. But she has pretty strong feelings about immersing yourself in your interests, as opposed to relying on school as your way in. Said Reid in her interview with Milk Studios:

I tried to cultivate a lot of opportunities early. I worked in a kitchen at an adult’s job for two years. I did that just by emailing someone...There’s a lot of power in asking to do something. It’s an opportunity, and people really respect you for asking. People want to teach others, and I have benefitted from that.

In Chambers, she plays Becky, the ghost of a teenage girl who continues to haunt the organ donor who had the misfortune of receiving her heart.

Sasha, the transplant recipient, can still feel Becky's lingering spirit, can access her memories, and even begins to take on Becky's characteristics. She begins piecing together the sordid details of Becky's suspiciously wealthy family, and they, in turn, keep a close eye on Sasha by lavishing her with a (much-needed) scholarship. The show is set in Arizona and Sasha's character is of Navajo descent, while Sivan Alyra Rose, the actress who plays her, is also from Arizona and of Native American descent, according to Refinery29. Thurman, meanwhile, plays Becky's mom and a very fit-looking Goldwyn plays her dad. The series looks super creepy, so if that's your thing, Chambers is now streaming on Netflix.