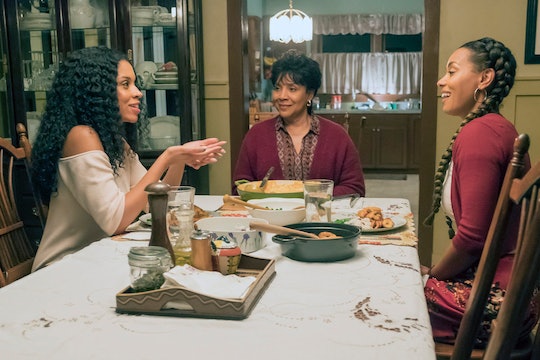 You're Definitely Going To Recognize Beth's Mom On 'This Is Us'

The episode of This Is Us, "Our Little Island Girl," promised to give fans insight into Beth's past as a dancer while in the present she struggles to define her future. It seems dance was her true passion, and her mother, Carol forced her to give it up. Fans obviously want to know everything about the woman who plays Beth's mom on This Is Us.

"You didn't have to take it from me!" Beth says to her mom in the promo. "You had gone as far as you could go," Carol replies, without missing a beat. Who dare take Beth Pearson's dream away? What actress must go toe-to toe with Susan Kelechi Watson? It's Phylicia Rashad, who is perhaps best known for her role as iconic TV mom Claire Huxtable on The Cosby Show.

More recently, Rashad played Diana Dubois on Empire. Diana was a constant thorn in the Lyon family's side. She blackmailed, lied and even orchestrated a seduction scheme on Jamal with the help of her nephew. So playing the woman who ripped a Pearson's dream away is just another day at the office for her. She also plays mom to Michael B. Jordan's character Adonis Johnson in the Creed movies, and wife to Adonis' father Apollo Creed in the Rocky movies.

If music is more your jam, perhaps you've seen Rashad in Drake's "In My Feelings" video, which currently has over 180 million views on YouTube. But she also has an impressive theater resume. Most notably, she became the first black woman to win a "Best Leading Actress in a Play" Tony Award in 2004 for her role as Lena Younger in Raisin in the Sun.

Even after all of these accomplishments there's a special reason why her role as a mom on This Is Us is particularly meaningful to her. As reported by the LA Times, Rashad once taught Watson during her tenure at Howard University. “She was so young and so delicate and yet so strong in a very very quiet way,” Rashad told the Times of Watson's temperament.

These days, Rashad is 70 years young and still going strong. In 2018, the Wallis Annenberg Center honored Rashad and her sister, Debbie Allen, who plays Jackson's mom Catherine Avery on Grey's Anatomy as well as directing and executive producing — with a night celebrating their respective legacies in the entertainment industry. It was cleverly called, "A Tale of Two Sisters."

This past June, Rashad's own mama, Vivian Ayers Allen, a Pulitzer Prize nominated poet, began an initiative to restore the Brainerd Institute, a school that was founded in 1866 with the goal of educating the children of freed slaves. Rashad and Allen supported their mother's mission. Rashad recalled a comment her mother once made to her after a performance for the Wall Street Journal : "No matter who you’re playing, you’re always being me.”

There's no telling yet where Beth will end up after on this emotional rollercoaster sometimes called a television show. But no matter what happens to Beth, Carol is one mama fans can't wait to meet.