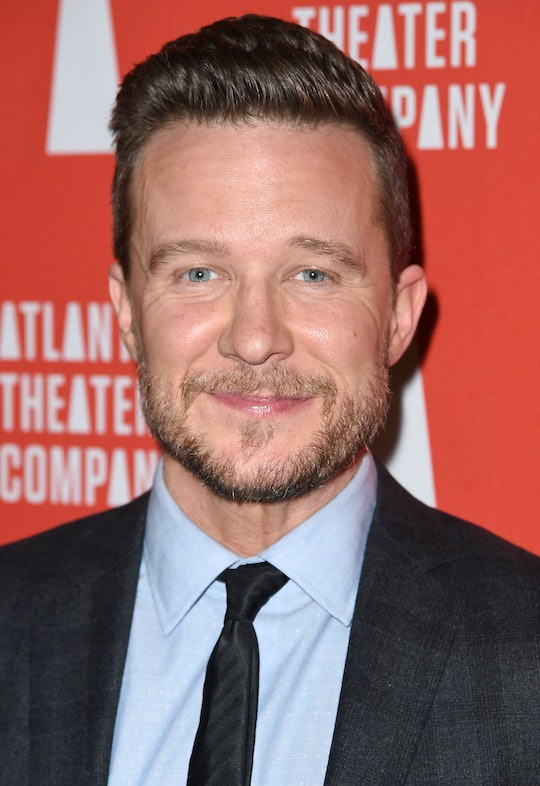 There were some new kids on the scene in the second season of Stranger Things. The step siblings, Billy and Max, caused a lot of commotion when they moved into town, especially Billy who turned out to be a big bully. However, as is often the case, it appears that Billy learned his nasty ways from his dad. So who plays Billy's dad on Stranger Things? Nashville star Will Chase snagged the role and oh man does he look different. Warning: spoilers ahead for Episode 8!

Chase made his appearance in the eighth episode when Billy's dad and Max's mom came home to discover Max was missing. Naturally, the parents were upset, but Billy's dad, Neil, took his anger a little too far by throwing his son up against the wall and slapping him across the face. Even his wife was a bit shocked at the hostile interaction. Neil is a nasty and mean character, which is so different from who Chase is in real life, that you may have not even recognized him. (I know I certainly didn't at first.)

If you're a fan of Nashville, you probably most recognize Chase as Rayna James' almost husband, Luke Wheeler. Chase had a recurring role on the series and appeared in more than 60 episodes of the popular country drama. Prior to that, he's popped up in a number of various TV shows and films. When he was first starting out he had small roles on series like Fling, Guiding Light, Third Watch, Queens Supreme, Conviction, As the World Turns, All My Children, Law & Oder, Canterbury's Law, and many more.

After that he started getting recurring roles on popular shows, such as One Life to Live, Rescue Me, Smash, The Good Wife, and Sharp Objects. In fact, it was around this time that he got his big role on Nashville. Following Nashville, he nabbed a recurring role on the short lived Time After Time series that followed the lives of H.G. Wells and Jack the Ripper. He then went on to appear on HBO's The Deuce and NBC's Law & Order: Special Victims Unit. You can next see Chase in the second season of American Crime Story: Versace, which will air on FX next year.

Besides his TV roles, you may have also spotted Chase in the films Butterflies of Bill Baker, Four Single Fathers, and Shaft. Along with being an incredible actor, it shouldn't surprise you that Chase is also a great singer. From his role on Nashville, he produced a number of catchy singles, including Have a Little Faith In Me and If I Drink This Beer. He also has a very long résumé on Broadway, which includes headlining Something Rotten!, and starring in Rent, Aida, and Billy Elliot. Additionally, he received a Tony nomination in 2013 for his role in The Mystery of Edwin Drood.

To say Chase is talented would be an understatement. It's no wonder that he could go from playing such a nice and fun character like Luke Wheeler to a slight terrifying and abusive father on Stranger Things. While I certainly love to see Chase on my TV (or computer) screen, I'd be happy to never see Billy's dad ever again. Thankfully, that may have been the first and last time viewers will have to deal with Neil. But then again, you never know who may pop back up in Season 3.