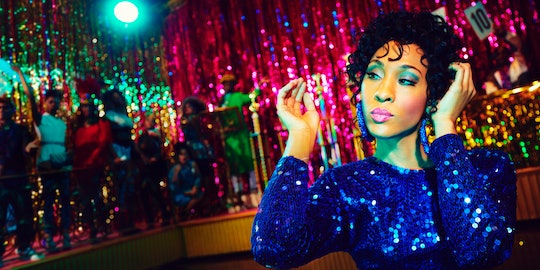 Blanca On 'Pose' Has Us All Completely Entranced

Pose focuses on several characters competing in New York's ball scene in 1987, with particular attention paid to Blanca Rodriguez, mother to the up and coming House of Evangelista. Blanca looks after her self-made family like any mother would, trying to keep them safe and pass on what she's learned. A recent HIV diagnosis left Blanca desperate to leave behind a legacy, and the actress who plays her imbues that journey with warmth and strength. But who plays Blanca on Pose?

The cast and crew of Pose is historic: according to the New York Post, there are 140 transgender actors and crew members working on the show, with five trans actresses in major roles. Taking on the role of Blanca is Mj Rodriguez, an actress you might recognize from small parts in several other big TV shows. Pose is her first lead role on television but she's been successful on stage, too. If Rodriguez looked familiar to you, perhaps it's because you've seen her in Nurse Jackie, The Carrie Diaries, or Luke Cage. She's also appeared in several short films, including Dear Pauline Jean, Bun in the Oven, and Gema. She shared the big screen with Pose co-star Indya Moore once before in 2017's Saturday Church, and Rodriguez is also going to be in the upcoming movie The Big Take.

Rodriguez has played a couple of notable theatre roles as well. She got her start playing Angel in a 2001 off-Broadway revival of Rent, a role for which she won a Clive Barnes Award. She was spotted by Rent's original Joanne Jefferson (actress Fredi Walker-Browne) while taking part in a Summer Youth Performance Workshop at the New Jersey Performing Arts Center, and that led to her audition for the off-Broadway production.

Angel became a very personal role for Rodriguez, who told Playbill, "It wasn't like being a character. I was in character, of course, but I was also living me and telling my story through Angel." But Rodriguez felt something was missing in her offstage life, saying:

I started to look into [the transition process] more, because I knew deep down inside I'm putting on a smile for these wonderful people who see me backstage… I'm not putting it on just to put it on — it's genuine — but deep down inside, I wish they could see me like the character that was up on that stage. Her hair and [clothes]… Just living. But I couldn't. And, I'm not saying the company [made me feel like] that. It was me that was holding myself back because I felt like I had to fit into this mold of what people want to see.

Though Rodriguez explained in an interview with Broadway.com that she had been dealing with those feelings for some time, she came out publicly as trans after her time in Rent was done. She went on to join the cast of the Encores! Off-Center production of Runaways.

Pose gives Rodriguez her biggest role to date, and it's one that means a lot to her. She told Time Out that she felt she and Blanca were "pretty much the same person" and many of the things Blanca went through resonated with Rodriguez's own life. "I have always been someone who has been casted out and had to find my way by myself, and I feel like Blanca had to do that as well," she said, continuing:

I don't want to be ostracized, why do I gotta be ostracized? I'm just like you! But there's been a lot of scenes that have touched upon the pain that I have experienced in my life. I always triumph over it, and the character always triumphs. You feel it and then you let it go and you move forward.

It's clear that Pose has found the perfect Blanca in Rodriguez.