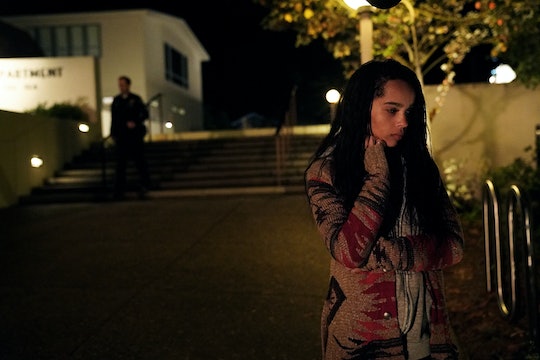 Big Little Lies is (finally) back and the "Monterey Five" are bound together by what happened at the end of Season 1. Meryl Streep has arrived as Perry's mother, but she's not the only new face joining the cast. Season 2 will delve a little deeper into Bonnie's story, including her relationship with her mother. So you might be wondering who plays Bonnie's mom on Big Little Lies.

If you spend a lot of time digging into the Oprah empire, you've probably seen actress, Crystal Fox, on OWN's The Haves and the Have Nots as devout mother, Hanna Young. In Big Little Lies, she'll play Elizabeth Howard, Bonnie's mom. If you caught the premiere, you know Bonnie is struggling with her part in the death of Perry (Alexander Skarsgård). Maybe the addition of Fox as Mom will help Bonnie come to terms with her detachment — then again maybe not.

If you're still don't recognize Fox, she got her official acting start in '89 in Driving Miss Daisy. She's an icon in her own right with credits like six years on The Heat of The Night and multiple other one-off and recurring appearances. Her IMdB bio states she's a North Carolina native who was in "several theatrical productions, including For Colored Girls and Everybody's Ruby." It was the Tyler Perry production The Haves and The Have Nots that catapulted Fox into an even bigger spotlight. If you ask me, she'll make the perfect addition to the Big Little Lies cast.

After a skim through Fox's public Instagram feed, it's clear she's just as pumped to be on the show as I am to watch her on it. She seems to be a fan herself, posing for pictures with co-stars, James Stupper and Meryl Streep. Who wouldn't?

Fox recently spoke to Madame Noir about her role as Bonnie's mom saying, "I was and am a fan first. The buttercream icing is that I am cast as Elizabeth, Bonnie’s mom." She went on to confess her presence will reveal more about Bonnie's past. "You can expect to learn how Bonnie’s path has led her to where she is now and find out that her mother is as flawed as the next person," she said. "That’s what makes us human. People all come from somewhere and parental intentionality may not be received as one intended."

To recap Season 2 so far, the Monterey Five have begun the new school year and seem to have bonded over the fated incident with Perry on Trivia Night. For the most part, all the ladies are the same strong characters they were before that season ender, but with the exception of that little big lie between them. Bonnie seems to be the most affected — because she's the one who actually pushed Perry to his death — but Madeline (Reese Witherspoon) made sure she wouldn't get in trouble by telling police Perry fell down the stairs. Now, the women are connected through the events that unfolded that night.

As with any flawed human, who knows what Bonnie will think if she finally learns the truth. Maybe she'll be able to comfort her daughter or maybe she'll be just another trigger. If there's one thing this show has made clear, it's that parenting is complicated.