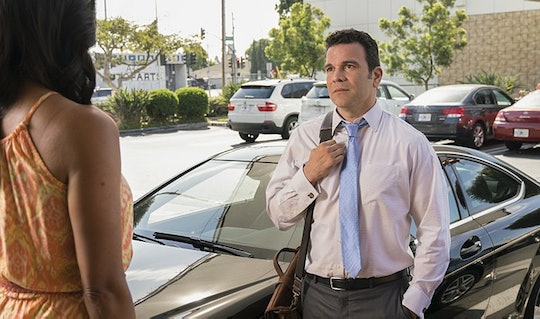 It's finally time for the winter premiere of Jane the Virgin and as always this new episode is sure to be filled with plenty of drama. Besides the many other crazy things currently happening in Jane's life, her mother is now dating her ex-boyfriend Bruce, who was married when they first got together. At first Jane didn't like Bruce because she believed he played Xo by not telling her he was married. Little did she know Xo had known all along. Now Jane still doesn't like Bruce, but she's not so happy with her mom either. So who plays Bruce on Jane the Virgin and will he cause a rift between the mother/daughter duo?

Bruce is played Desperate Housewives alum Ricardo Chavira. If you were a fan of the drama, you probably recognized him as Carlos immediately. Funnily enough his onscreen wife, Eva Longoria, recently directed an episode of Jane the Virgin. Unfortunately, Chavira wasn't on the show yet, so there was no Desperate Housewives reunion. However, Chavira did recently appear in an episode of Longoria's new (and unfortunately, short-lived) show, Telenovela, where he did get to work alongside her once again.

Besides starring in Desperate Housewives, Chavira also currently has a recurring role on another ABC drama, Scandal. Fans may remember him as the Democratic presidential nominee Frankie Vargas who Cyrus uses to get back into the D.C. politics game. With the return of TGIT this Thursday, it looks like fans of both shows will be getting a double dose of Chavira this week.

As Bruce, Chavira only adds an extra layer of intrigue to the already drama-filled CW show. Although Xo originally told Rogelio she was going to tell Bruce off for breaking her heart way back when, she instead ended up reuniting with him, a fact no one's really happy about.

Though Bruce is divorced now, Jane is still skeptical about him and is very open about how much she doesn't like him. However, in typical Jane fashion, she'll probably try to put her feelings about her mom's new boyfriend aside and be supportive. Until she can't hold it in anymore. That's when all hell will break loose and I can't wait.