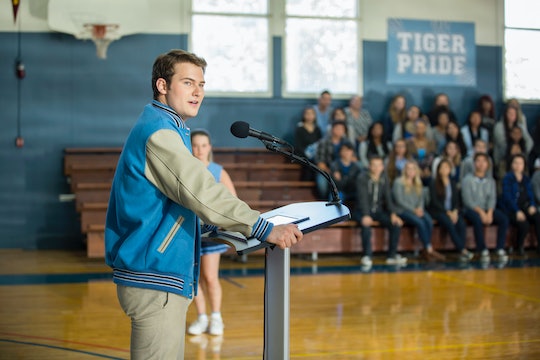 Bryce From '13 Reasons Why' Is Much Nicer IRL

Netflix's 13 Reasons Why may center around the story of Hannah Baker — who ends her life before the start of the show — but there are a lot of characters at play throughout the telling of her story. As Clay Jensen listens to the tapes that contain Hannah's reasons behind her suicide, he learns that many of his classmates, including himself, played a role in her decision. While some people's actions could be considered small, there are a few others who made really bad choices. One of those people is popular jock Bryce. So who plays Bryce on 13 Reasons Why? Justin Prentice tackled the difficult role.

Prentice has appeared on a variety of shows over the years and viewers may recognize him. Prior to 13 Reasons Why, Prentice played a character also named Bryce on the TruTV comedy Those Who Can't. Awkward fans may also recognize him as Tamara's boyfriend Patrick. Besides that, he also had recurring roles on iZombie, Glee, Malibu Country, and iCarly and made appearances on Preacher, Criminal Minds, Melissa & Joey, The Middle, Victorious, Subgatory, NCIS: New Orleans, The Mindy Project, Castle, and CSI: Cyber. Prentice has also lent his voice to animated shows such as Winx Club: Enchantix and The Legend of Korra. So it's clear 13 Reasons Why is far from being his first major role, though he may very well end up being remembered mostly from this particular part.

Prentice hasn't just been on the small screen, however. He's appeared in a few films, including Sex, Death and Bowling, Some Kind of Hate, Me Again, and Terri. Prentice is also set to star in the thriller film Brownstone, which is set to release some time this year.

Just like most of the characters on 13 Reasons Why, Bryce's role in Hannah's life is a bit of mystery at first. He's obviously popular and a bit of a bully, but what did that have to do with Hannah specifically? As the show progresses, it becomes more and more clear how Hannah and Bryce's lives intertwined and how Bryce's actions not only affected Hannah's life, but also the lives of many other people around him.

Along with Prentice, the show also stars Katherine Langord as Hannah, Scandal star Dylan Minnette as Clay, Private Practice star Kate Walsh as Hannah's mom, Parenthood star Miles Heizer, and many more. The show, which is based on the bestselling novel of the same name by Jay Asher, was executively produced by Selena Gomez.

13 Reasons Why will be available for streaming on Netflix beginning on Friday, March 31.