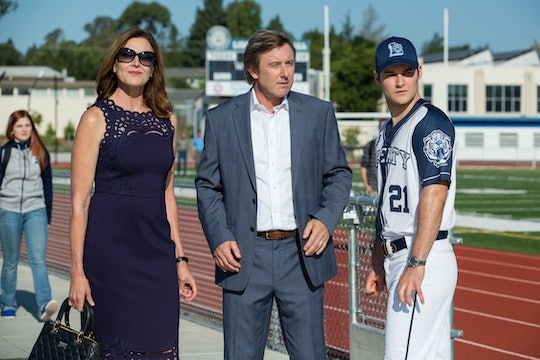 13 Reasons Why returns to Netflix this summer, but after giving viewers closure on Hannah Baker's (Katherine Langford) death, the series needs a new mystery. On Aug. 1, Netflix finally dropped a trailer setting up the central question at the heart of Season 3: who killed Bryce Walker (Justin Prentice)? The trailer shows his classmates ominously gathered around his casket while his parents grieve nearby. So, since it looks like he'll be a pretty major focal point this season, let's take a closer look at who plays Bryce's dad on 13 Reasons Why. Jake Weber is a super recognizable actor and, considering he has three decades in the industry under his belt, odds are you probably know him from something.

Incidentally, Jones actually challenged Weber to a boxing match over the character, according to a 2018 NPR interview with Homeland creator Alex Gansa. Added Gansa: "What Alex Jones doesn't realize is that Jake Weber is a boxer and has been training as a boxer for the last 20 years, so I think he might want to change the arena of that challenge." Bloop!

Weber has had stints on other short-lived shows as well, like HBO's Mind of a Married Man, which aired from 2001-2002, and FX's Tyrant, which aired from 2014-2016. Back in 1995, Weber played Dr. Matt Crower on CBS' on-again-off-again horror series American Gothic. And in 1997, he appeared in six episodes of the Peabody Award-winning PBS documentary Liberty! The American Revolution. An equally recognizable movie star, Weber memorably played Michael in 2004 zombie flick Dawn of the Dead, and Drew in 1998's Meet Joe Black.

Weber, a British actor, endured a colorful childhood, which included living at Rolling Stones guitarist Keith Richards' Villa Nellcôte for a time. In fact, the 2010 documentary Stones in Exile features footage of an eight-year-old Weber rolling joints for the band at Richards' South of France hideout, according to the Sydney Morning Herald.

“Some people can juggle soccer balls. Me? I can roll a killer joint in about 3 seconds flat,” Weber joked in a 2009 People interview. “When I was [4], basically the reason for my existence was to roll the joints.”

Weber first joined the cast of 13 Reasons Why in Season 2, when viewers got a closer look into Bryce's life of immense privilege. As Bryce's dad Barry, he's extremely concerned with protecting his son. Barry unnervingly grills Bryce on whether his new girlfriend will be "loyal," buys the school a new baseball field in the hopes of sowing good will for his son, and even actively works to cover up his son's actions. My guess is, Barry's dark side will only get darker as he seeks to avenge his son's death.