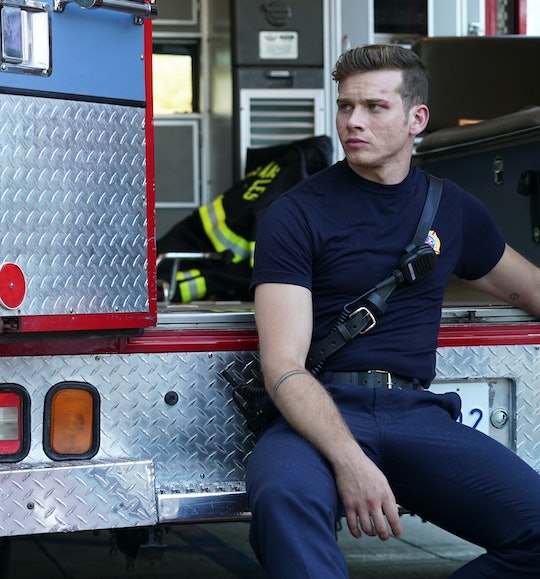 Buck From '9-1-1' Is Your New Favorite Firefighter

The creators of the hit series Glee, American Horror Story, and Niptuck are bringing a new show to FOX called 9-1-1. The series is a procedural drama that follows the lives of emergency responders, which includes police officers, fire fighters, and the people who answer those 911 phone calls. One of the series regulars on the show is Buck, who is a firefighter. So who plays Buck on 9-1-1? British actor Oliver Stark landed the role and from what I can tell, he's perfect for the part.

The 26-year-old is most well-known for his role on AMC's martial arts based drama, Into the Badlands, where he played resident bad boy Ryder. However, he won't be returning for the series' third season because — spoiler alert! — his character was killed off in the second season. But with his new role on 9-1-1, Stark probably would've had to leave the show anyway, so at least it was already planned.

Prior to his work on Into the Badlands, Stark made a number of appearances on TV shows and in movies. You may have seen him in the movies Break In, Community, The Adventurer: The Curse of the Midas Box, Montana, Hard Tide, MindGamers, or Underworld: Blood Wars. On the small screen you may recognize Stark from Casualty, Luther, Big Bad World, Dracula, or Venus vs. Mars.

Stark seems to be focused on 9-1-1 right now and doesn't have any other projects lined up at the moment, but this is probably just the beginning for him. The show includes a phenomenal cast consisting of Golden Globe winner and Emmy and Oscar nominee Angela Bassett, as well as Emmy nominees Connie Britton and Peter Krause.

Additionally, the show's creators, Ryan Murphy and Brad Falchuk, have been known to work with actors again and again if they like them. For example, both Britton and Bassett have had roles on American Horror Story. Thus, this could be the start of a great working relationship for Stark and set him up for even more roles in the future.

For now though, Stark seems to be doing well where he is right now. He appears to be in a relationship, based on a picture he posted on Christmas where he's kissing a woman's cheek. However, it seems he's keeping the identity of his girlfriend under wraps, at least for now.

Stark is also very interactive with his fans and responds to comments on his Instagram and Twitter, about his work and life. He's also very open about the social causes he supports. In his Twitter bio he states that he's a feminist and marks his location as "Black Lives Matter." He's also been actively trying to spread awareness of the work first responders do, along with promoting 9-1-1. The series is currently running a Twitter campaign to raise money for the National Fallen Firefighters Foundation.

It's obvious that Stark is not only a caring person but is also pretty funny. In his Twitter bio he also let everyone know that the red mark above his eyes is "a birthmark not eye herpes." He's also gotten into funny discussions online about his love for pineapple pizza, a topic he said in an interview back in April that he now tries to avoid.

There's no doubt that once 9-1-1 takes off, as I'm sure it will, Stark will only become more well-known and his popularity will surely go up. This is only the beginning for Stark, so get to know him now so you can say you knew him way back when.