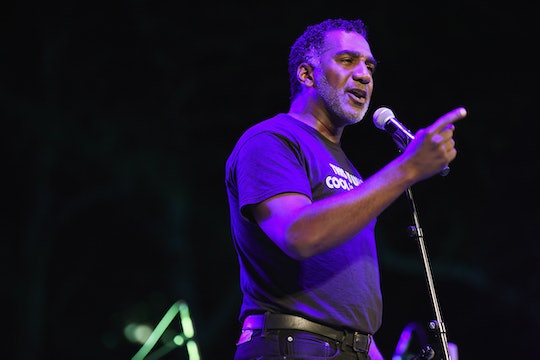 There's A Reason You May Recognize Caiaphas On 'Jesus Christ Superstar Live!'

Jesus Christ Superstar Live! is sure to be an incredible production. The original composer and writer Andrew Lloyd Webber and Tim Rice have returned as executive producers on the show and the cast is phenomenal. Grammy-winner John Legend stars as Jesus Christ himself and Grammy-nominee Sara Barielles will play Mary Magdalene alongside him. Of course, the major roles are star-studded but the smaller roles are as well. For example, if you're wondering who plays Caiaphas on Jesus Christ Superstar Live!, it's none other than Tony and Grammy nominee Norm Lewis.

Lewis has been in the business for a long time now, performing on Broadway, on TV, and in film. So you'll probably recognize him, but in case you're not familiar with his amazing work, he got his start on Broadway in Miss Saigon back in 1991. He then continued on Broadway in productions of The Who's Tommy, Chicago, and Side Show. Lewis then moved to the small screen for a little bit with a recurring role in the soap opera, All My Children, in 1998. He also had a small role in the TV series Strong Medicine, before moving onto film, where he appeared in Preaching to the Choir and Sex and the City 2.

Lewis continued to do Broadway productions all the while, appearing in Dreamgirls, Chess, Hair, The Wild Party, Amour, Les Misérables, The Little Mermaid, and Sondheim on Sondheim. Then in 2012 in he starred in Porgy and Bess as Porgy, which earned him a Tony nomination. He followed that up by becoming Broadway's first African-American Phantom in The Phantom of the Opera in 2014. Following this historic role, Lewis then went on to star in the revival of Once on This Island early this year.

If you can believe it, Lewis also continued to do film and TV work during all these years. He was in the films Winter's Tale and Magnum, and a plethora of TV series, including Hustling, Blue Bloods, The Blacklist, Gotham, Chicago Med, and Younger., though many may recognize him best from his recurring roles on Scandal as Olivia's ex-fiancé, Senator Edison Davis and on Daytime Divas as Williams Tomas. Thus, Lewis is always keeping busy.

After Jesus Christ Superstar Live!, Lewis will be heading to London for An Evening with Jason Robert Brown, where he will perform with pianist Jason Robert Brown, and a number of other musicians and singers, for a special one night only concert special with the 60-piece BBC Concert Orchestra. If you're wondering what comes next after that it's hard to say with Lewis. He's also busy and hasn't yet announced his next move, but with his long resume it could anything from another Broadway run to a film. Fans will just have to wait and see.

As for his role in Jesus Christ Superstar, Lewis' character, Caiaphas, is the high priest that organized the plot to kill Jesus. Thus, Lewis will be playing a villain in this show. Acting alongside him is two-time Tony Award nominee Brandon Dixon as Judas, Jesus' apostle who has concerns for the poor and the consequences of Jesus' popularity. He's also the guy who betrayed him.

In addition to Lewis and Dixon, the cast also includes Alice Cooper as King Herod; Tony nominee Ben Daniels as Pontius Pilate; Broadway vet Jason Tam as Peter; M. Butterfly star Jin Ha as Annas; and Swedish rocker Erik Gronwall as Simon Zealotes. As you can see the cast is incredibly talented, so even if you've seen Jesus Christ Superstar, in any of it's various iterations, you definitely won't want to miss this new production.