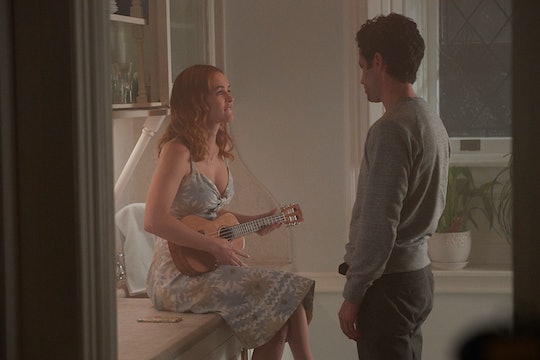 Candace's Fate On 'You' Could Change Everything In Season 2

Throughout Season 1 of You, Joe was haunted by memories of his ex-girlfriend Candace. Fans may have feared the worst for poor Candace based on Joe's track record, but the finale proved that she had managed to evade his destructive clutches after all. Now that Joe knows Candace is alive, she might be a larger presence on the show in Season 2. And viewers might want to get to know the actress behind the character. But who plays Candace on You?

Candace is played by actress Ambyr Childers. She's previously appeared on the soap opera All My Children as Colby Chandler, as well as on Ray Donovan and Aquarius. In addition to her television work, she's had steady roles in film, landing in small parts in 2011's All Things Fall Apart and 2015's Vice, among others. And acting isn't her only passion, either. In 2015, she launched a Native American-themed jewelry line with Kate Bosworth called AC Jewelry. You can check out the pieces on the company's official website. According to Page Six, Childers drew inspiration for the line from her own heritage as a member of the Choctaw Tribe.

Childers' role in Season 2 of You was limited to Joe's fever dreams and a few flashbacks, until she was revealed to be alive in the finale. But now fans can expect to see a lot more of her. Showrunner Sera Gamble told Cosmopolitan UK that Candace's return will have a huge impact on the direction Joe's life takes going forward. "I can tell you we will see more of Candace and that she shakes Joe to the core with what she brings to the story," Gamble said. "And so it propels that character [Joe] a lot in what he decides to do next."

Keeping Candace alive is a major departure from the book the show is based on. In Caroline Kepnes' novel, Joe does kill Candace, giving him one more skeleton in his already packed closet. But Gamble felt that bringing her back "opens up options of what will happen next." Perhaps Joe will finally have to contend with his past coming back to bite him.

Childers' teased Candace's return on Instagram with a photo next to Joe's infamous book cage (as well as a screenshot or two), but she hasn't shared any spoilers about the upcoming season. Even though viewers know that Joe didn't manage to kill Candace, her character is still a mystery in a lot of ways. Depending on how much she knows about Joe's misdeeds (and I'm guessing she knows a lot), she could unravel everything for him. To which I say: go, Candace!

Without the book to rely on as a blueprint, Candace's storyline could go any number of ways in Season 2. The only thing viewers know for sure is that they're definitely going to be seeing more of Childers in the future.