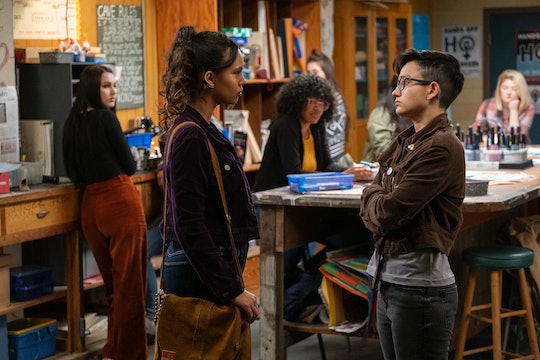 13 Reasons Why returns to Netflix this summer, pivoting away from all things Hannah Baker (Katherine Langford). After focusing on her suicide for two seasons, the series finally moves past her death to set up an all-new mystery heading into the third season. As the trailer asks: who killed Bryce Walker (Justin Prentice)? The new season introduces a bevy of new Liberty High students, including a character named Casey. But Bex Taylor-Klaus, who plays Casey on 13 Reasons Why, is no stranger to Netflix.

They recently played Hannah Perez in Dumplin', Willowdean's ultra-feminist sidekick who aims to dismantle the patriarchy by walking in a beauty pageant wearing a truly magnificent cowpoke costume. Prior to that, Taylor-Klaus played Sin on The CW's Arrow, the bisexual Audrey Jensen on Scream: The TV Series, and genderqueer basketball player Lex on House of Lies. But their earliest show-stealing role was playing Bullet, a homeless butch lesbian teen, on the second season of AMC's The Killing. (They even named their dog Bullet after the beloved character, per their IMDb bio.) Needless to say, Taylor-Klaus has been one of TV's preeminent queer dreamboats of our time. And, because those who Netflix together stay together, they of course hang out with Shannon Purser and even attended the Stranger Things 3 premiere.

Taylor-Klaus came out themselves in a 2016 YouNow broadcast, according to Autostraddle, replying to a fan who asked if they were afraid:

Terrified, absolutely terrified. Part of why I’m coming out is because there’s so much hate and fear in and around the LGBT community right now and it’s important for us not to halt progress out of fear. Yes, it’s a scary time, but we need to stand up and say, even if you are afraid, I’m not afraid, or even if I am afraid, I’m strong. I am who I am and you can’t take that away from me.

They followed up with a tweet confirming that they are, in fact, "v gay," and came out again via tweet as nonbinary in 2018. Taylor-Klaus even passed them.'s LGBTQuiz, testing their knowledge of queer characters — you know, the small handful they don't play themselves — with flying colors. They bubbled over with enthusiasm for everything from Adventure Time and BoJack Horseman to Dykes To Watch Out For and all the comics. (Just, all of them.) Of course, their prolific comic universe knowledge is not a huge surprise, considering they also voice Pidge, a historically male character reimagined as female for Netflix's Voltron: Legendary Defender reboot.

Not much has been revealed about Taylor-Klaus' character Casey ahead of the 13 Reasons Why Season 3 release. But the trailer does show Casey and Jessica Davis (Alisha Boe) confronting a group of jocks in the hallway of Liberty High. Casey wears a t-shirt with a pink Venus symbol on it, and they're joined by two other students, one of whom carries a sign that reads "Keep your hands off our bodies." They look ready to stage some sort of rally or protest, so whatever Casey's role is, it looks like the show nailed its casting.

13 Reasons Why is now streaming on Netflix.