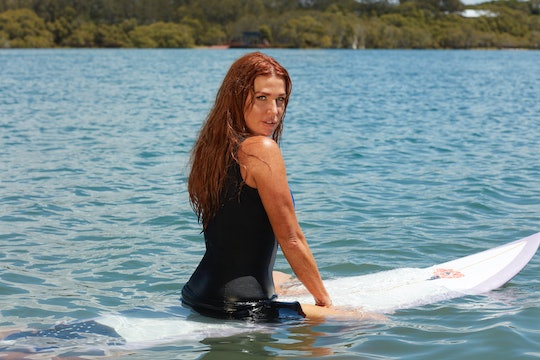 The Main Character On 'Reef Break' Is Seriously Impressive

Summer is here which means laid-back fun in the sun — including on TV. ABC is getting in on the fun with the new crime drama about a "thief-turned-fixer" who uses her knowledge of crime to help the government of a Pacific Island catch criminals. She sounds like an amazing woman, right? If you're wondering who plays Cat Chambers on Reef Break you've come to the right place.

Poppy Montgomery plays the lead, and also executive produces the show. She's proud of the bad*ss female heroine she's helped create. There are so many reasons why you've never seen a character like Cat on TV before, and so many of them are informed by the actress who plays her.

Montgomery is from Sydney, Australia and she's most well-known for playing Samantha Spade on the CBS procedural crime drama Without A Trace. When the show ended in 2009, she went on to Unforgettable, where she starred as Carrie Wells, a former police detective who has the ability to remember all of her experiences thanks to detailed visual recall. She's played some kick-butt women, but couldn't shake the feeling that TV was missing a very specific kind of female character. That's where Reef Break comes in.

"I don't know if I've ever seen a woman on television, certainly not network television, who surfs and skateboards and drives Miami Vice-style boats fast," Montgomery told ABC 7 NY about what inspired her to create the character of Cat. "I don't know that I can recall any show where I've seen a girl do that, and so I'm really proud that we've pulled that off."

Montgomery has had the idea of playing Cat in her head for about five years, but she told ABC 4 Salt Lake that she had to wait while her show Unforgettable was "cancelled and then uncanceled and then cancelled and then uncanceled." It was worth the wait, because now she's getting paid to play. She does her own water stunts like the jet ski chases. Montgomery is a surfer herself, but she told the network she leaves all of the "cool" dangerous moves fans see on the show to her stunt double.

The actress is a dual citizen of the U.S. and Australia, so she has the best of both worlds with Reef Break. It airs in the U.S. but was able to film on many locations in Australia. There's not much green screen used on Reef Break for the stunts or the overall scenery. Montgomery is excited to get to show off the other place she calls home. "Australia is so unique and it's so beautiful and it's still so pristine in a lot of ways. And I think that in creating the Reef we get to show off the most beautiful parts of Queensland and what Australia has to offer," she told ET Canada.

"I wanted to live vicariously through [Cat]," Montgomery told ABC 7 about why she wanted to executive produce the show and what informs her decisions about it. Personally, I'm inspired by both the character and the woman who plays her — either of their lives seem fun to live for a day. So I'm glad I can get a taste of both every week this summer.