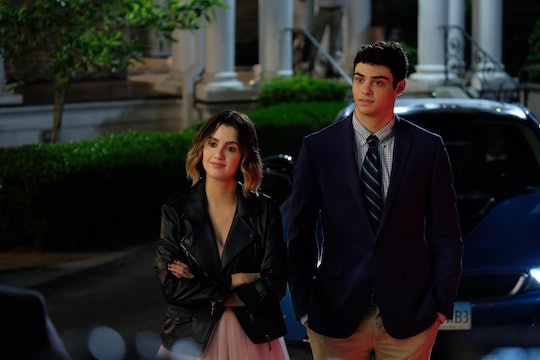 The Perfect Date isn't a reboot, a sequel, a book adaptation, or a genre film, but the rom-com still has a huge built-in audience for its Apr. 12 premiere on Netflix, thanks to its gaggle of young stars, most of whom are extremely recognizable. For viewers wondering where they've seen the actress who plays Celia in The Perfect Date before, Laura Marano has Disney roots, but she's definitely making a name for herself in the grown-up film world.

Marano famously played Ally on Disney Channel's Austin & Ally for five years, a role which earned her three Teen Choice Award nominations, and a Kids' Choice Award win. She booked tons of one-off roles on more serious television dramas before that, but from 2007-2010, she played a young Sarah Silverman on the comedian's eponymous Comedy Central show. More recently, she played Diana Greenway in Greta Gerwig's Oscar favorite Lady Bird, which was a pretty big get for the 23-year-old actress.

Marano is also continuing to cultivate her music career after being signed and then dropped by two record labels in the span of a year without ever releasing an album, according to StyleCaster. So Marano decided to make her own way. She launched her own independent record label, dubbed Flip Phone Records for her lingering loyalty to flip phones, which she still uses. She recorded an EP titled Me and released it in March of this year.

"This is the most empowered and in charge of my destiny I’ve ever been in my life. It’s pushed me to be in control of every part of my life, as much as I possibly can," Marano told StyleCaster. "In a lot of ways, Me is re-introducing myself to the music world and all of my fans. Because I am this new version of myself."

Co-starring in a Netflix rom-com alongside everyone's favorite internet boyfriend Noah Centineo just one month later is another huge move for her. Marano managed to pull her music into the film as well with two songs on the soundtrack. But aside from that, she plays Celia, one of the two love interests in The Perfect Date's central love triangle. The film is actually a little bit of a reunion for her and Centineo; he guest-starred on Austin & Ally seven years ago, so the pair go way back together.

Marano gushed of her co-star in an interview with Entertainment Tonight:

He's just, like, the loveliest guy. He has been since he's been 15. We've been there for each other since the beginning. It was so sweet, when we were working on The Perfect Date he kept saying to people, 'Laura's show's the reason I moved to L.A.' But he was definitely making it seem like it was because of my power and I will assure you, I have, like, no power. But I was like, 'Aw, Noah.'

She said they even recreated an impromptu awkward dance moment they shared on Austin & Ally in the movie, so it seems like their chemistry is still as strong as ever. The Perfect Date is now streaming on Netflix.