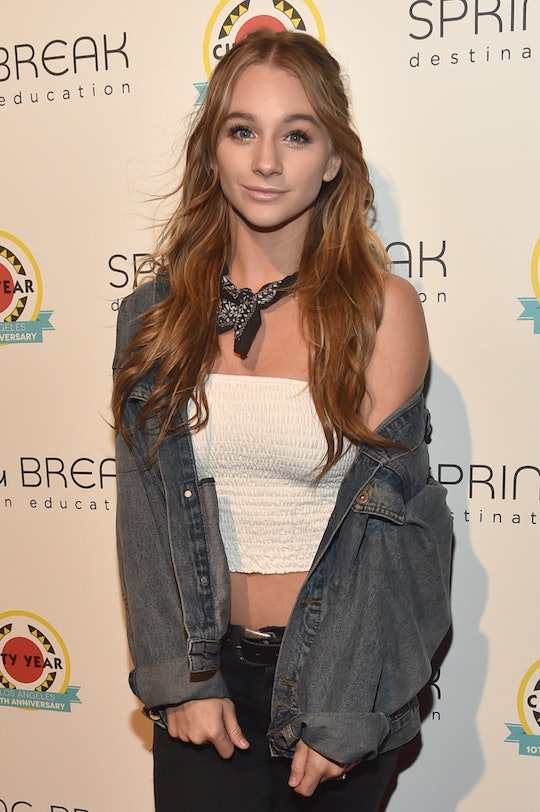 Here's Where You Know This 'A Night To Regret' Actress From

Lifetime's summer movie series is here, and this year's theme is "Summer Escape" — giving us plenty of guilty pleasure fodder to keep us entertained while zonked out in front of the A/C on Sunday nights. Every week in June, Lifetime is premiering a new original movie, and the third installment involves — what else? — the stalking and kidnapping of a beautiful college co-ed. A Night to Regret has a couple of big name stars in it, but viewers may be wondering: who plays Chelsea Bilson in A Night To Regret? Mollee Gray may look familiar to fans of the High School Musical franchise.

She's previously appeared in Disney Channel original movies Teen Beach Movie, Teen Beach 2, and all three High School Musical films as a principal dancer. She's also had dance roles on Drop Dead Diva, Victorious, Suburgatory, and Austin & Ally. A Night To Regret is her second Lifetime original movie after 2015's Double Daddy, and Gray has two theatrical release films set to come out in 2018: The Reliant and The Favorite. A Night To Regret's trailer looks full of thrills, but mostly in that campy Lifetime way which will be very fun to dissect with friends. The faux-intrigue is pretty much TV junk food at its finest.

In A Night To Regret, Gray plays Chelsea, a college student who reunites with her childhood best friend after growing apart. Unfortunately, the pair wind up falling into some trouble and Chelsea pays a price. Per the Lifetime synopsis:

When college student Chelsea Bilson meets up with her estranged childhood best friend, Milla, she is unprepared for the events that follow. Milla, who is now a webcam girl, briefly catches Chelsea on camera during one of her shows. Unbeknownst to her, Chelsea has now been exposed to a watcher who becomes obsessed with her beauty and naiveté. He soon discovers Chelsea's true identity and will stop at nothing to have her to himself. Chelsea enlists the help of her mother and the two must fight for their lives in order to stop an obsessed and murderous madman.

Gray stars alongside some other cult-favorite actors. Marguerite Moreau, best known as Katie in Wet Hot American Summer and its subsequent Netflix reboots, plays Chelsea's mom, Beverly Bilson. Moreau also had roles in some pretty memorable 90s classics including The Wonder Years, all three The Mighty Ducks movies, Boy Meets World, Blossom, Free Willy 2, and The Secret World of Alex Mack. Meanwhile, on this side of Y2K, she played a recurring doctor on Season 10 of Grey's Anatomy.

Last year, Gray, who is also a So You Think You Can Dance alum, married her wife Jeka Jane, according to People. "Our wedding day couldn’t have been more magical," she told the magazine at the time. "The love we received from all of our family and friends was remarkable, and we feel so grateful. We can’t wait to experience this life as the new HERsband and wife."

Jane is also a dancer/choreographer and she proposed on April Fool's Day, which I think we can all agree was a bold move. She rented out North Hollywood’s Republic of Pie, which is where the couple shared their first date, and flew in all their friends and family to be present for the occasion, which probably helped signal the fact that the proposal was very much not a joke. The couple first met in 2009, and later started dating in 2013.

If you want to catch Gray in her starring role, you can tune into A Night To Regret when it premieres Sunday, June 24 on Lifetime.