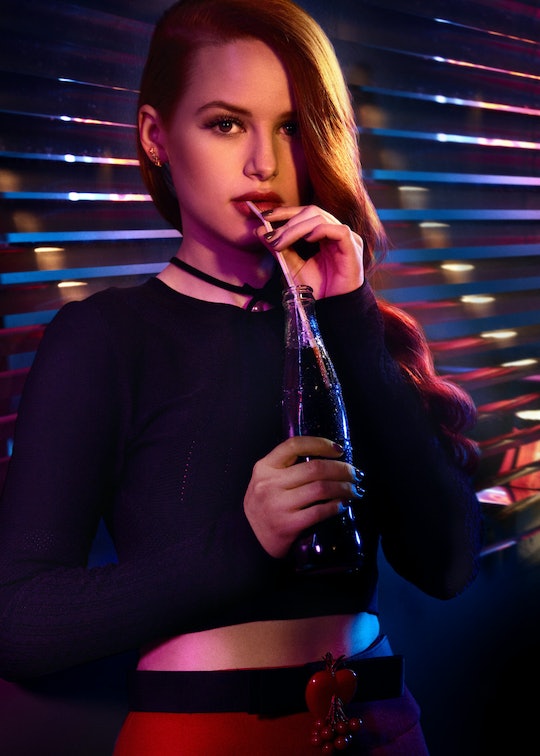 On the much more scandalous TV adaptation of the Archie comics, Riverdale, there is going to be more than just the title character redhead to focus on. But because every teen drama on The CW needs a villain, Cheryl Blossom, whose entire family in the show has matching bright red hair, will be the bad girl of the series. She pulls it off so well that fans will definitely be asking who plays Cheryl on Riverdale. Madelaine Petsch is fairly new to the acting scene, meaning she's been in just a handful of other projects before Riverdale and has only been acting since 2015. But in all of the promos for the new CW series, she absolutely kills it on-screen as Cheryl, the rich and holier-than-thou antagonist of the Riverdale crowd.

When you wipe off the layers of red lipstick and take away the sarcastic smirk, though, Petsch is a much more approachable in real life and pretty cool person all around in general. At San Diego Comic-Con in 2016, Petsch spoke about her newest and biggest role yet as Cheryl on Riverdale and described the character as a "vixen and lead villain" on the show, which is very juicy and fun. And the important thing is that she stays humble.

According to IMDB, Petsch's first credited role was in the sci-fi movie The Hive, starring Sean Gunn (Gilmore Girls) and Kathryn Prescott (Finding Carter), and she went on to appear in an episode of Instant Mom and the movie The Curse of Sleeping Beauty. Next up for Petsch is F*&% the Prom, but it's pretty obvious that the actress has found a huge break in landing her role as Cheryl.

Riverdale premieres on The CW on Thursday, Jan. 26, but already the cast has grown close and Petsch's Twitter and Instagram feeds are full of posts about the friends she's found in her new castmates. And that only means her playing the villainous Cheryl is that much more genius if she's really this nice in real life.

However, as down to earth as Petsch seems to be, she plays the bad girl frighteningly well and it's the sort of role that will easily help her stand out in a series full of strong parts by other relative newcomers. In the comics, Cheryl was a similar bad girl who enjoyed doing it and while there's no reason to suggest that the TV translation will be much different, there is always the need for a series villain. And from what I can take, she's going to be the perfect fit.