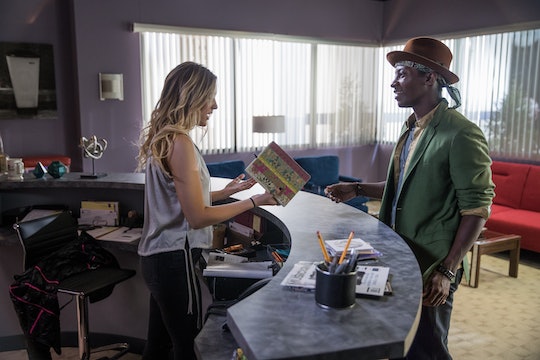 Amidst all the tension on Nashville Season 5, one of the few things that went back to normal were relations in the Jaymes-Claybourne house. Maddie is living back home, seems to be fine with being on her mom's label with her little sister for now, and is currently building character with a thankless internship at a recording studio. It's probably the most normal her teenage life has been, so enter: love interest. It's been a slow burn between them thus far, but Maddie and Clay have all the makings of an adorable flirt-lationship. So who plays Clay on Nashville? Joseph David-Jones is a relative newcomer.

He booked the role of Clay following a nationwide casting search the show did, which included both live auditions in New York, Los Angeles, and Nashville and an online submission. David-Jones was also just in the latest Divergent series movie Allegiant, playing the role of Hollis opposite Shailene Woodley. In 2016, he did a couple of episodes of The CW superhero series Legends of Tomorrow, but his arc on Nashville will be much more significant. He's slated to appear in almost every single episode this season.

According to Deadline, Clay is more than just a cute boy trying to charm Maddie. His darker side has yet to emerge. Deadline describes Clay as "a musician in his mid-20s who is destined for great things. He is a creative, self-aware, highly motivated young man who suffers intense mood swings but nonetheless is charming and outgoing." So it's possible that Maddie might have a potentially abusive love interest on her hands, which could be a powerful emotional parallel to her relationship with Deacon. Also note how much older Clay is described to be than Maddie.

She spent most of last season freaked out by Deacon's bouts of rage, which seemed to come whether he had relapsed back into his alcoholism or not. It was the most essential piece of Maddie's legal case against her parents when she filed for (and was granted) emancipation. Even though all she really wanted was to be in control of her own music career, she cited her fear of Deacon's violent outbursts as a threat to her safety and stability at home. The judge agreed with her and she was able to break away from her family.

It could be tumultuous for Maddie and Deacon mending their broken relationship to introduce a new, volatile romantic relationship to Maddie's life, but it seems like Clay is around to stay this season. Let's just see what becomes of it.