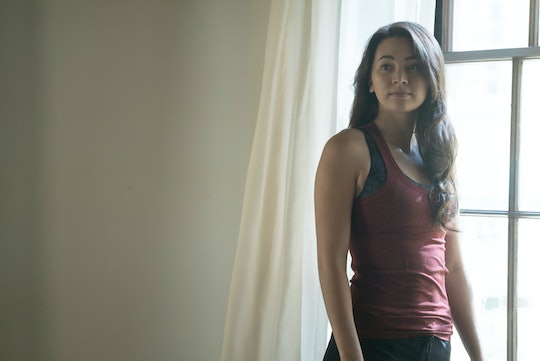 Colleen Wing Is A Fierce Heroine On 'Iron Fist'

Every superhero has to have a sidekick, or partner-in-crime, and Iron Fist — also known as Danny Rand (Finn Jones) — is no different. The latest Marvel hero coming to Netflix may have a mystic energy that makes his fist seem like it's made of iron, but that doesn't mean he's all powerful. Danny still needs help and that's where Colleen Wing comes in. So who plays Colleen Wing on Iron Fist? England-born actress Jessica Henwick snagged the role of the comic book heroine and I must admit that it's the perfect casting choice.

Just like her costar Jones, Henwick also had a recurring role on the HBO hit series Game of Thrones. She played Nymeria, one of the Sand Snakes. Unlike Jones though, she'll be appearing in the upcoming (and highly anticipated) Season 7. She'll also be reprising her role as Colleen in The Defenders, which is due out later this year, so you're going to be seeing plenty of her in the months to come. You may also recognize Henwick from her small role in Star Wars: The Force Awakens as Jess Testor. She's also appeared in other films including Newness, The Head Hunter, Dragonfly, and Dr. Liebenstein, and in the shows Fortitude, Inspector Lewis, Silk, North by Northamptonshire, and Spirit Warriors, according to IMDB.

Besides Iron Fist, The Defenders, and Game of Thrones, Henwick is also slated to appear in the Kickstarter-funded film Rice on White this year and she's also just been cast in a new thriller film, Underwater, alongside Kristen Stewart, Variety reports. It looks like Henwick's going to be very busy in the next year and Iron Fist is only the beginning for her.

Henwick's character Colleen, is a bit of a badass in the new Netflix series, much like her comic book counterpart. If her story arc sticks to the page version of her character, her day job will involve teaching at a dojo, but at night she may find herself participating in a fight club-type of situation to win money. Unlike Danny, she's not rich and while the fighting begins as an extra source of income, it turns out she actually likes it.

Based on the previews for the show, it's not hard to assume that there will be a romance between Danny and Colleen, though whether or not it'll be a long lasting one is another question entirely. In any case, the two obviously team up and it'll be interesting to see how they work together as partners and where the show leaves them before they come together again in The Defenders.

You can meet Colleen Wing when Iron Fist premieres on Netflix on Friday, March 17.