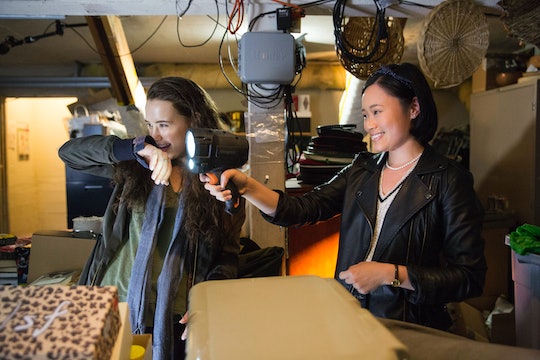 Netflix's much-anticipated miniseries adaptation of Jay Asher's YA novel 13 Reasons Why releases this month and it already has quite the built-in fan following. The book is a New York Times bestseller and beloved in YA circles, thanks to its deep explorations of teen suicide, betrayal, rape, and the mental health struggles which accompany adolescent trauma. It follows high school student Clay Jensen as he unravels the mystery of his crush Hannah Baker's sudden suicide, for which she implicates various people as being partly responsible. Among them is her classmate Courtney Crimsen, but who plays Courtney on 13 Reasons Why? Michele Selene Ang joins the ensemble cast in her on screen debut.

Ang graduated just last year from Fordham University's Theater Performance program at Lincoln Center. She made her Off-Broadway debut earlier this year in Bryna Turner's new play Bull in a China Shop, which premiered at LCT3, part of Lincoln Center's new works lab initiative. But 13 Reasons Why marks her first recurring role on a TV series. Warning: book spoilers ahead!

On the surface, Courtney is a familiar stereotype within a high school setting: popular, pretty, perfect — or so Hannah believes. In the book, they strike up a causal friendship and Hannah even enlists her help in busting a peeping Tom who Hannah believes has been taking pictures of her through her bedroom window. They decide to reel him in by purposely posing themselves giving each other sexually charged massages, before running to the window to catch him in the act.

But after that pretty intimate bonding experience, Courtney pulls away and Hannah realizes she only leaned into the friendship because she's courting votes for the yearbook's "most liked" superlative. Hannah feels disappointed but one day, Courtney circles back to ask for a ride to a party. Hannah calls Courtney out on only offering closeness when she needs something, but she gives her a ride anyway. At the party, a boy approaches Hannah saying he'd heard from Courtney that she keeps sex toys in her dresser.

Hannah, who is constantly fighting old rumors from her last school about an allegedly promiscuous past, is furious Courtney has betrayed her trust — like so many others — by reinforcing the rumor. Courtney spread (untrue) gossip that she discovered Hannah keeps sex toys in her dresser while in her bedroom, and, because it's high school, it's enough to stoke the flames of Hannah's "promiscuous" reputation.

Ultimately, Courtney makes the list of people Hannah blames for her death, because of her betrayal and the way she uses people. It's a common trope, but the modern twist on fighting sex-negativity makes it feel fresh and contemporary. I have no doubt Ang will shine in her role. 13 Reasons Why releases on Friday, March 31.